Newsletter
Sign Up today for our FREE Newsletter and get the latest articles and news delivered right to your inbox.
Home » 1964 Chevrolet Impala Super Sport – Motivation 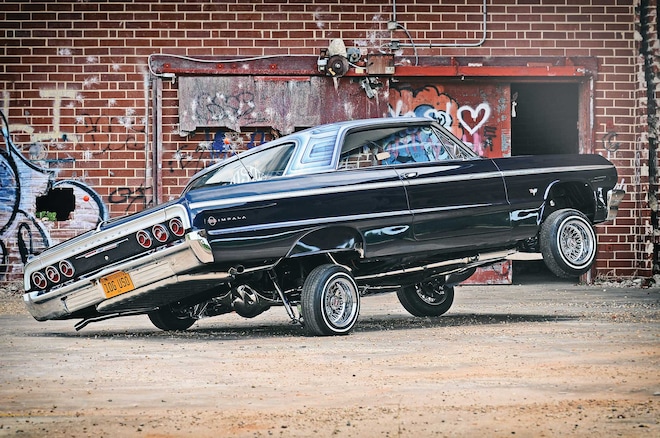 Many things motivate people to create a custom lowrider vehicle. For Fred Bryant of Raleigh, North Carolina, it was disappointment. For 17 years Fred owned “Jungle Love,” an ’82 Cadillac that graced the pages of LOWRIDER in 2013. After owning a Cadillac for that long, he decided it was time to go bigger. Because the ’64 Chevy Impala is the most desired for the lowrider enthusiast, Fred, the president of USO in North Carolina, enlisted his friends and USO members to keep an eye out for a project Impala.

A hit came back for a ’64 Chevy Impala SS in Charlotte, North Carolina. Fred drove there with cash in hand and purchased the vehicle and brought it back home. He threw a hydraulic setup on it and added some wheels and then brought it to a local show. Fred had been used to receiving top honors with his Caddy so he was excited at award time with the new Impala. To his surprise he didn’t even place in the show. Disappointed, Fred brought the Chevy back home and put it on jackstands.

His vision became more and more grandiose. He started by removing the engine and transmission. The hydraulic setup was gutted as well as the undercarriage. Fred got his hands dirty handling the bodywork to the Chevy along with shaving the firewall. A new custom mix of Midnight Blue was added throughout the Chevy but he needed something even better. Pablo, better known as “KandyNChrome” was flown in to lay patterns down to the firewall, roof, frame, package tray, and beauty panels.

The undercarriage was sent off to be chromed at Concord Plating in Concord, North Carolina, along with all the dressing for the engine. The second hydraulic suspension was added by Fred with the welding help of Mbuchi Thiani in his carport. Fred brought the Impala to JB Auto Upholstery in Raleigh, NC, for a new custom interior. His friend Hernan engraved the door handles, seat supports, antenna bases, and other odds and ends.

Fred’s second attempt at a build was a huge success. He wishes to thank his family, his wife and kids, Makena and Robert, his friends, his USO family, along with friends, Mbuchi Thiani, Rudy Carr, and Wil Brannock. He may have been disappointed with the results of his first show but after finishing the Impala there’s never been a show he’s come back from without an award. His Chevy Impala is a success that has everyone wanting to “PayFred.”