Newsletter
Sign Up today for our FREE Newsletter and get the latest articles and news delivered right to your inbox.
Home » Top 5 Lowrider Truck Features of the Last Decade 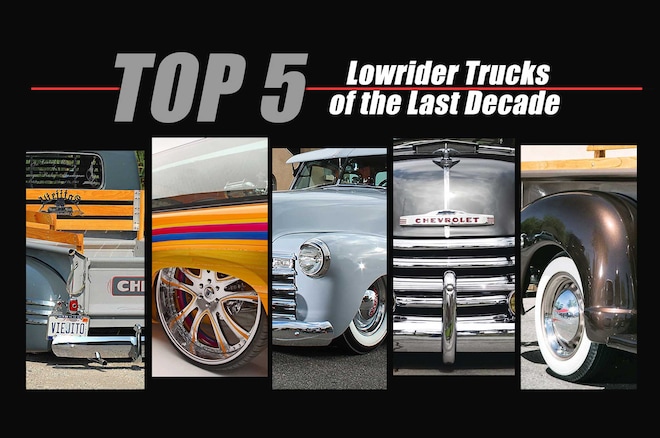 There are a few different ways to put together a Top 5 Lowrider Truck Builds list, some of which could be based solely on opinion, while others might rely on the number of trophies or other accolades that have been earned. However, rather than have us arguing back and forth via yet another Zoom meeting, we decided to just let the numbers decide.

With the ability to dig back over 10 years, we were able to get a rundown of what stories were the most frequently viewed by Lowrider Magazine’s fanbase. Of the list, a trio of Chevy 3100 pick-ups were joined by a ’40s-era Suburban, but the number one spot, suprisingly enough, went to something much more modern with a wild style. Here are the top 5 Lowrider truck builds of the last decade in order, starting with the number 1 most popular feature.

You probably expected the number one most visited Lowrider truck story to be based on an old school chassis, but Hector Esquivel’s ’14 Tahoe stole the show in more ways than one. Multiple award winning, including Lowrider Truck of the Year, “La Reina” was originally intended to push Nokturnal C.C. into the DUB scene, but Hector wanted to build something next level that could hold its own at both DUB and Lowrider shows.

The mix of styles, eye-popping hits of color and unique customization that includes wrapped ’65 T-bird seats, 28in Asanti AF159s and a one-off Hoppo’s hydraulic set up all but force you to take a closer look. See the fine details right HERE.

Tito Mandujuano Jr. was destined for Lowriders with both his father and his uncle deeply rooted in custom car building. His uncle’s unfortunate passing would interrupt the two tbrother’s build-up of this 3100, but Tito was determined to get it finished and proudly cruise his local streets. However, that too would have to wait while he spent 6-years serving our country with the Marines before returning home and going straight to the garage to fire up the ’53. Tito and his father then went back through the truck and tied up all the loose ends, also adding a 3-pump CCE set up. Other highlights include two-tone paint, highlighted with pinstripe work courtesy of Hollywood Customs. This truck has to been seen in the sunlight to fully appreciate its glow, and we’ve got that for you right HERE.

Robert Herrera’s father, someone he admires greatly, originally introduced him to the Lowrider culture at around the age of 10 years old and he’s never looked back. A member of Bridgetown Oldies C.C. for years, it was actually his father’s suggestion to sell his custom ’48 Fleetline to try his hand at building a Suburban. A 2-year journey of parts sourcing and plenty of hard work by Robert and his car club and the result was well worth the wait. Activate the two pump, four dump hydraulic system and the pristine Suburban body settles comfortably over its 15in artillery wheels. The entire photo gallery is available HERE.

George Tamayo was also introduced to custom cars at a very young age by his father, who would eventually go on to open his own custom body shop. The influence was undeniable and George’s resume of vehicles is huge and includes everything from VWs to monster trucks. Some of the tricks and skills handed down from his father were applied to this ’53 and included some help from George’s son, Gabriel. The custom PPG Dove Grey paint against Firestone whitewalls is a combination that looks every bit as good now as it would have 60 years ago. Find the complete photo shoot right HERE.

This ’53 3100 began as a father and son project and is a product of the Old Memories C.C. “Bombs Factory” in Tucson, Az. The outside, smothered in Champagne Beige and Chocolate Mocha Brown sees some definitive contrast thanks to a solid oak bed flanked by matching wood stakes. After some detailed updates, like the picket fence grill, foglights and a Fulton visor, the truck would sit untouched for quite some time until fellow club member Johnny Arevalo decided he had to have it for his lowrider stable. See the rest of the photos right HERE.

*Just to note, the gap in the number of story views between the number 1 and 2 spots on this list, La Reina and La Coonster, was razor close.