Newsletter
Sign Up today for our FREE Newsletter and get the latest articles and news delivered right to your inbox.
Home » Thomas Padilla’s Fancy 1998 Chevrolet S-10 Truck 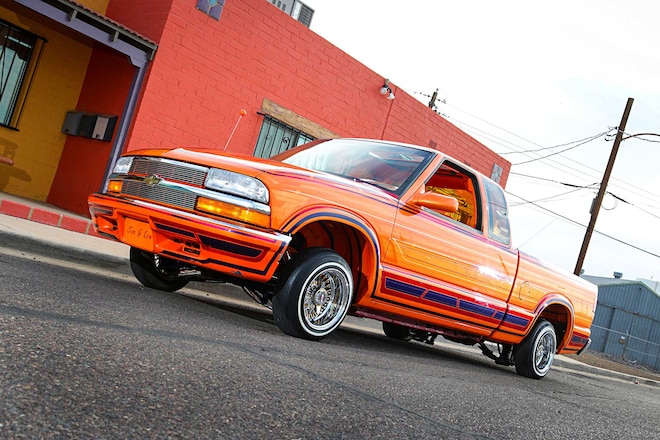 Thomas Padilla has been a member of Brown Society Car Club since it was founded back in 2010. At the time he owned a 1983 Chevy Monte Carlo and a 1983 Oldsmobile Cutlass. Of the two cars, the Monte Carlo was converted into an award-winning showstopper while the Cutty took backstage. The Monte Carlo was built so well that it gave Thomas a name in the car show circuit and in the process it took home multiple awards as well as various features, including one in Lowrider.

With his Cutlass still in the process of being upgraded and customized, Thomas admits that the project was dragging along at a snail’s pace. He wanted something new and that’s when a conversation with the club’s California chapter president, David Felix, changed things up. Thomas says that he’d always joke around with Felix, often asking him to sell him the truck, but the question was always rejected, with David saying “I won’t ever sell it.” As the offers continued, Thomas changed the tone of his approach and that’s when he told David that should he ever want to sell it all he needed was a 30-day notice and he’d pick it up.

Well, about two years ago, the phone rang and Thomas got his 30-day notice! Thomas could not pass up the opportunity to own this show truck that was already in perfect condition. It was not only award winning, but also freeway driveable! After a few days and a lot of text messages, Thomas and David met up at the halfway point between Casa Grande, Arizona, and Visalia, California, to make the exchange. It’s always good when a car or truck can stay within a club when going to a new owner. With the truck already in show condition there wasn’t much it needed, but Thomas did want to add his little twist on it, making his first stop at Afterlife Hydraulics in Phoenix so it could get a complete makeover on the custom hydraulic setup.

Thomas says he is very satisfied with the truck’s status now but may consider a tilt bed setup since those seem to be making a comeback nowadays. Stay tuned on that!

Thomas sends big thanks to David Felix for the opportunity to take over the truck, his wife, Racqule, his daughters, Adrina and Annlisa, for their support, and of course all his fellow Arizona Brown Society Car Club members.

Body/Paint
SNK Auto Body of Visalia, California, handled the bodywork, including shaving the tailgate handle and door handles and installing a sliding ragtop sunroof. Tangelo orange pearl with magenta and purple patterns were laid down on the truck’s body. Andy Avilez and Armando Villarreal added their talents with airbrushed murals in the Day of the Dead theme.

Interior
Rafael Felix of Visalia used orange vinyl and carpet to perfectly match the truck’s exterior. Digital gauges, a fiberglass center console, and billet trim round out the truck’s interior on the upgrades