Newsletter
Sign Up today for our FREE Newsletter and get the latest articles and news delivered right to your inbox.
Home » This 1940 Ford Pickup Was Homebuilt With Friends and Family 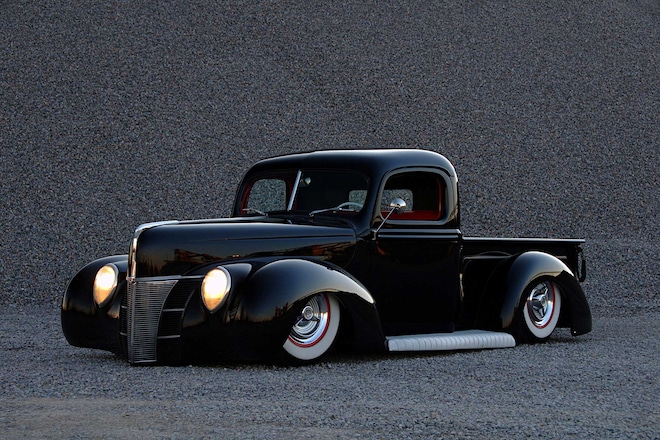 There’s always something that lights the fuse, leading you down a path into the automotive world. It can come in many different forms and for Dylan McDowell of Stouffville, Ontario, Canada, it was his first ride in a vintage pedal car accented by a seemingly endless Hot Wheels collection. Being born into an automotive family had a lot to do with it as well, especially since his parents owned some pretty wicked rides, including a 1951 Chevy custom, 1964 Corvette, and a nasty 1966 Chevelle SS. In fact, some of his earliest memories surround the complete frame-off restoration of the Corvette in the family garage where he gained plenty of knowledge while helping with the many tasks to bring it back to life.

Moving forward he learned about the importance of family and friends and how they all worked together to accomplish the goals on a project. It was his great-grandmother, Alice Turner, who recognized his passions for a classis truck when he was 12 years old and actually purchased a basketcase 1940 Ford pickup for him to drive his dreams forward. It may have only been a pile of sheetmetal and a cab but within it he saw greatness with a fresh vision of what it might become. By the time he was 14, he started on the build, having mapped out his ideas with his dad, Jamie, and car club members from The Lead Kings. Unfortunately during this time his grandmother died, however her final wishes included a small inheritance for Dylan to dedicate to finishing the build.

The association with The Lead Kings cemented what traditional customs were all about. By taking the youngster under their wings and giving him a welder in one hand and a hammer in the other, he learned the fine art of customizing. The goal was to build an affordable custom truck with friends lending a hand while remembering this was a lesson as well, indoctrinating Dylan into a future in hot rodding. To get started a clean Chevy S-10 pickup truck frame was sourced from a local swap meet, stripped bare, and C-notched out back. It was imperative that the truck would have a slammed stance so a Chevy 10-bolt rear filled with 3.55 gears was suspended in place with a Welder Series four-link combined with a matching Panhard bar. To hit the pavement, a set of Firestone ‘bags get the job done. Up front the original S-10 IFS was freshened up and matched to Belltech 2-inch drop spindles along with Firestone ‘bags controlled by RideTech air valves. To slow the pace an early Camaro dual power master pushes juice through steel lines to factory drums out back and discs in front. It all meets the pavement on a set of classic 15-inch Chevy steelies wrapped with Coker Classic wide whites wearing 1956 Oldsmobile caps.

To bring the project to life Dylan sourced a 1970 Ford Mustang 302ci V-8 in the neighborhood and hauled it home on a four-wheeled cart with help from his friend Chris Carter. The engine was a pullout and was in solid running shape with a mild cam, so he degreased, prepped, and gave it a fresh coat of paint, for starters. Even better, the engine came with an original Ford three-deuce intake topped with Holley carbs and a homespun air cleaner as well as finned aluminum valve covers. It all sparks to life through an Accel electronic ignition with spent gases dumping though a set of no-name headers to a custom 2 1/2-inch steel exhaust with Flowmaster mufflers. The goods move rearward through a warmed-over Ford Top Loader four-speed linked to a custom driveshaft.

When it came to the cab and bed there was plenty of voodoo on the horizon. With the spark of a welder it all started to take shape, working with Jamie and good friends Aaron Roberts and Lorne Brand. The cab was first chopped a well-balanced 2 inches followed by a 4-inch sectioning, 4-inch channel, shaving the door handles, and fabrication of a completely new floor with transmission tunnel. A 1940 Ford DeLuxe car hood and grille were then added, complemented by a pair of 1938 Ford DeLuxe car fenders while the bed was shortened 8 inches with fenders moved up 5 inches and filled with a custom oak floor. Once all the cutting and welding were completed it was handed over to Wayne Scales of Port Perry to make everything razor sharp, dial in all the gaps, and block it to perfection. Picking a color Dylan wanted to make an impression, so he called on Jeff Arbour of Bradford to lay down a mile-deep coating of PPG gloss black to add plenty of class.

To add just the right amount of dazzle to the business office, vibrant red sheetmetal accents make a statement. A 1940 Ford car dash with restored gauges combined with a Classic Instruments column-mounted Rocket Tach and complementing underdash dials monitor the vitals while a 1937 Ford banjo steering wheel carves the course through a stock column and shifts move through a stick from Hurst. Dylan and Jamie then installed the Speedway Motors wiring harness and plush red carpet. For comfort and style, the original seat was covered with plenty of red and white pleated vinyl by Curtwood Custom Upholstery of Huntsville who also covered the running boards with matching pleats. This is truly a memorable truck personifying what can be done with the help of friends and family, and we dig it.