Newsletter
Sign Up today for our FREE Newsletter and get the latest articles and news delivered right to your inbox.
Home » A Street Sweeping 1948 Chevy Suburban 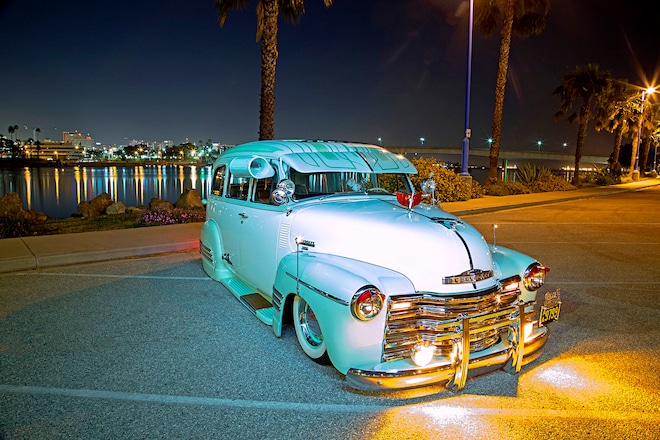 Like most, I have a love-hate relationship with text messaging. Whereas with phone calls we have the option of declining or ignoring a call, there’s something seemingly strange about text messaging. You see, when you decline a phone call it’s out of sight and out of mind, but with a text we all seem to have this strange habit of not responding but still reading the damn text. It’s a crazy phenomenon that many can relate too, but on the flipside, not all texts are bad. Over this past summer I actually received one that landed this feature.

Conrad Ramierz sent me a text letting me know that they’d be in Los Angeles for a Bomb Show in Long Beach. He explained that they were bringing a Suburban that I might be interested in shooting. After scoping out the attached photos, I immediately recognized the Suburban from a previous trip I had taken to Dallas. We agreed to schedule the photoshoot right after the show and met at the South Shore launch ramp in Long Beach. The accompanying skyline served as the perfect backdrop for this giant beauty; it was an eventful shoot, to say the least.

After doing a onceover on the truck, we began to look at the details and started out front. Lifting the massive hood revealed a cavernous space that’s fitted with the original 216 engine bolted up to a set of Fenton headers. Inside, the interior boasts a custom center console in the back while the seats are wrapped in brown leather, with a host of OEM accessories, including a compass and butterfly steering wheel. Outside, the imposingly hulky Suburban sports a unique two-tone mint paintjob with traditional patterns on the roof. To help offer a low-slung look, the Suburban’s rockers now sit on the floor, thanks to an airbag setup with a custom-notched frame, while a set of classic 16-inch Artillery wheels are wrapped on Coker tires.

To see the Suburban in person is incredible, and as our shoot came to an end it was loaded up on a trailer in preparation for its maiden voyage back home. In what seemed to be an unreal experience, this shoot also made me think of how far we’ve come. There used to be a time when people had to mail in their pictures for a chance to be featured in LRM, but now technology has bridged the gap and given us a chance to connect to others in just seconds.

Engine
Original 216 motor with a three-speed open-drive transmission along with Fenton headers and dual exhaust.