Newsletter
Sign Up today for our FREE Newsletter and get the latest articles and news delivered right to your inbox.
Home » Sonny Ayala’s 1950 Chevy Thriftmaster – GNRS 2018 Spotlight 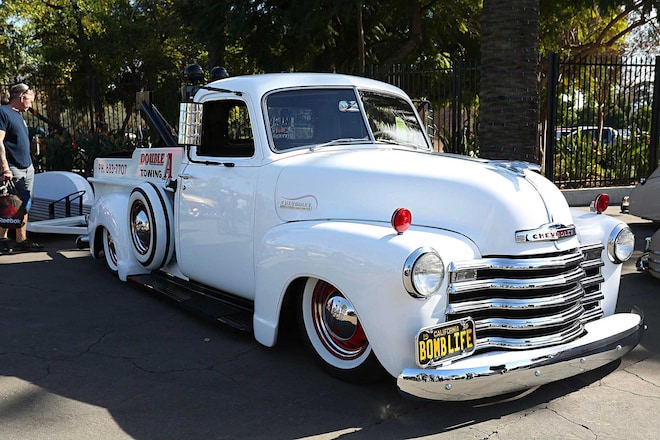 At a show as massive as the Grand National Roadster Show there are bound to be a few vehicles that are trailer queens and need to be towed in. But how often do you see a tow truck that looks as good as any show vehicle? This is the case of one particular tow truck we found parked with the guys from Bomb Life Car Club.

After seeing this tow truck we had to learn more about it so we asked a member of Bomb Life if he could point us toward its owner, and that’s when we met Sonny Ayala who told us all about his truck.

The truck, a 1950 Chevy Thriftmaster, was originally owned by Sonny’s grandparents who used it as a tow truck for their business, Double A Towing, which they started way back in 1968. After they retired both the truck and the business it was passed down to Sonny’s father before eventually being passed down to him.

After receiving the truck Sonny decided to restore it to its former glory-as well as adding a few touches of his own, such as airbags and a matching trailer that he could use to tow his motorcycle. Since the truck was one of the first ones in his grandparents’ fleet, Sonny decided to make sure it stayed true to its original heritage by keeping the original tow hitch. The end result is an immaculate-looking truck that any broken-down car would be proud to be hitched up to.