Newsletter
Sign Up today for our FREE Newsletter and get the latest articles and news delivered right to your inbox.
Home » Raul Saenz’s 2006 Ford F-150 – Krushin’ the Game 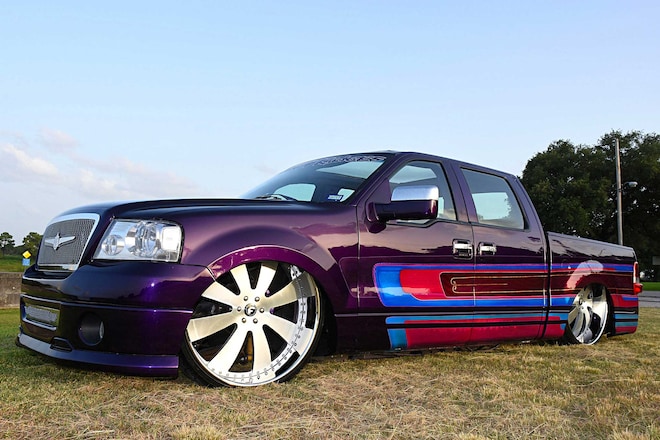 As a quality control inspector, Raul Saenz knows a few things about making sure the job is done right. From project planning to leaving no stone unturned, he used those same principles to build a truck that reflects his love for details.

Having previously built custom cars, his first project was a 1997 Grand Marquis that he built in high school. At the time, he was building on a budget, so he kept it simple. Years later, he found himself more financially stable and that’s when he decided to purchase a brand-new 2006 Ford F-150.

Originally the plan was to keep the truck as a clean street cruiser with some 24-inch wheels and a stereo system. However, that plan was diminished to dust when Raul decided he wanted a full custom showstopper.

Eight years later the slammed and candied head turner has now earned the moniker Kandy Krush. Since its debut, the truck has become a show favorite and has also given him the ability to showcase his lowrider roots while riding on 30s. The decision to ride on 30s was a costly one because it required making extensive suspension modifications, including shortening the rearend 3 inches on each side and installing a Texas two-link setup with slam bags on all four corners. All the custom fabrication was handled by the crew at Lil 1 Kustoms and now the 30×10 Forgiato Ottos tuck clean while laying frame.

With the suspension done, the attention shifted to the outside where he included suicide rear doors, split motorized tailgate, suicide hood, and a panoramic roof. Once again wanting to keep a lowrider feel to the truck, Raul took the truck to Jose Mendoza at Pistolero’s Designs where a multi-color candy could be laid down. Knowing that paint is one of the first things most people notice, nothing less than a top-notch job would be acceptable. Taking inspiration from some lowriding legends, a mix of candy purples, blues, and pinks were combined to create an exemplary color scheme. To highlight the paint Pistolero’s added some fine-line pinstriping throughout the truck. While the truck was disassembled for paint, several pieces, including the door handles and mirror covers, were shipped to Robert Junior in Dallas for some lowrider-style engraving.

Since Kandy Krush was going to see lots of miles, a comfortable interior that combined style and function was mandatory. For this the truck paid a visit to Ramon’s upholstery to have every piece either upholstered or painted. The stock bench seat in the back was removed in favor of a set of bucket seats to allow the console to flow from the dash to the back window. All four seats were done in a combination of Cigar Brown leather, Ostrich, Alligator, and suede. Manny’s Custom Creations created all the wild fiberglass work to complement the interior. No custom ride would be complete without over-the-top audio system. EFX Elite Auto styling installed a Pioneer double-din radio, four JL Audio subs with three amplifiers, and Pioneer mids and highs.

Looking back at the eight-year build, Raul said he wouldn’t change a thing. Being a quality control expert has definitely come in handy throughout the build. With good reason, he is proud of all the work that went into making his vision a reality.

Suspension
Stock axle was cut 3 inches from each side; Slam Bags airbag setup

Interior
Painted fiberglass parts and wrapped in Alligator, Ostrich, suede, and leather with the main color being Cigar Brown