Newsletter
Sign Up today for our FREE Newsletter and get the latest articles and news delivered right to your inbox.
Home » New Beginnings – For The Owner Of This 1946 Chevy Truck 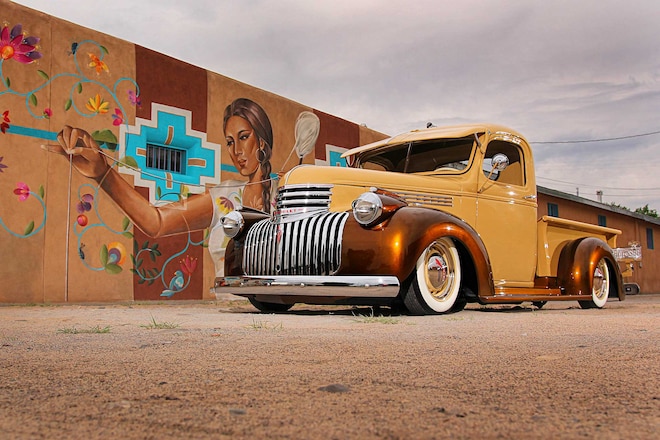 Barry Trujillo lives and grew up in Espanola, a small town in Northern New Mexico. Even though it is a small town, the lowrider scene has always been very rich there. As with all small towns, it has its share of problems. Lowriding is not the only thing people are addicted to there. Drugs have rocked this community and Barry fell victim to this for many years. But with his beautiful wife by his side and a will to change he was able to do a complete 180 and turn from his addiction to drugs. He is now a very successful electrical contractor and also a pastor at his church.

Barry does most of his business in nearby Santa Fe, which is about 20 miles away. One day on his way to a jobsite he saw this 1946 Chevy truck sitting on the side of the road. It had a For Sale sign in the window. He looked over the truck and thought it would make a nice daily driver. He already had a beautiful 1951 Chevy convertible, but it was way too nice to be a daily driver. Barry purchased the truck, did a little updating, and drove it daily for a few years. He then decided it needed a little more updating and put a quick paintjob on it.

Well, that quick paintjob didn’t go as quickly as he would have liked. It was also coming out way nicer than he could have hoped. So Barry talked it over with his wife and decided to go all out on the truck. From the grille to the tailgate, it was all redone. After the truck got back from paint he freshened up the motor, interior, and sent all the chrome to get re-dipped. Once the truck was all back together, Barry was cruising the streets of Espanola once again. But as with any projects it is never truly done. He contacted Griegos Customs in Chimayo for a little altitude adjustment. Now the truck looked right and was sitting right. Barry still cruises this truck on a regular basis, but now he is hitting up shows and taking home awards.

We are so glad that Barry, with his wife by his side, was able to turn his addiction around from drugs to cars. We also look forward to what he builds next.