Newsletter
Sign Up today for our FREE Newsletter and get the latest articles and news delivered right to your inbox.
Home » LS1-Powered 1948 Chevy Suburban Carryall: Former Racer Now Relaxed & Slammed 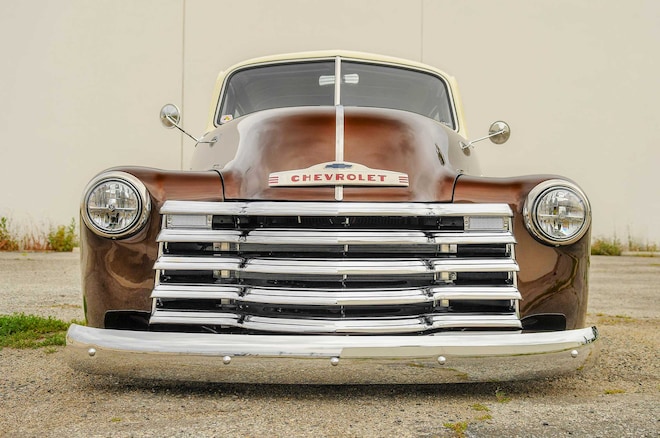 The laid-out 1948 Chevy Suburban is a rare sight, and to see one this well crafted and customized is even more of a treat. This station wagon here is owned by a car buff out of Vancouver, British Colombia. His name is Brad McKinnon, and let’s just say that cars play a huge role in his life. For him, it’s more than just a hobby. It’s a way of life and this is what he eats, sleeps and breathes. “It’s not only my day job, but a passion. If I’m not working on them, I’m looking at them online, on TV, at local shows, or hanging out with like-minded people who share the passion”. Brad’s interest began as a young boy; first riding and fixing up BMX bikes, then eventually graduating to cars when he was old enough to drive.

McKinnon, who is also a member of the famed club, Relaxed Atmosphere, built this beautiful root beer brown and cream 1948 Chevy Suburban Carryall—powered by an 5.3L LS1 engine—in his garage in just 10 months. The Suburban was a former track car, raced by its previous owner, and was found by McKinnon at an estate sale in Vancouver, British Columbia. He said the car “deserved a new lease on life” and while it initially looked decent, the horrors emerged after getting it sandblasted. Brad realized the severity of its condition, and let it sit idle for close to two years, until he was given the opportunity to build a car for the 2018 SEMA Show.

There was a one-year deadline for the SEMA project and somehow Brad managed to find an extra 60 hours a week, spending evenings and weekends working on the it. The build was done entirely in his two-car garage, without the support of a large shop or facility. The project itself wasn’t incredibly difficult, but it definitely had its challenges and along the way it presented plenty of learning opportunities. The Suburban had a lot of amateur body work done and there was also a good amount of rust to repair. The rust was the largest challenge, and the lack of available parts and panels didn’t make it any easier. But that didn’t stop McKinnon, with the help of new tooling and some good resources he was able to build and repair the metal.

Parts were difficult to source and some took months to arrive—a struggle anyone whose built a car can understand. Of all the parts, the ’48’s window trims were the rarest and most difficult to find. Brad found a parts guy in Long Beach that managed to track down a full set. He met up with Juan Trevino, Brad’s club brother, who then took the parts to Pro Design Hotrods to have them straightened and chromed but here’s where it gets interesting. Brad was lucky enough to have a neighbor visiting San Diego, so he arranged that he meet with Juan to pick up the parts and bring them back to him in Canada, and in the end his window trims wound up costing more than the initial purchase cost of the Suburban itself.

“I don’t think I would have done anything different. This truck drives so nice and smooth, I wouldn’t see any reason to be disappointed with it. As much as I would have loved to have more than 10 months to build it, that’s just how it fell so I had no choice but to succeed” says Brad.