Newsletter
Sign Up today for our FREE Newsletter and get the latest articles and news delivered right to your inbox.
Home » Jacob & Greg Lusk’s ’58 Chevrolet Apache – Golden Snowball 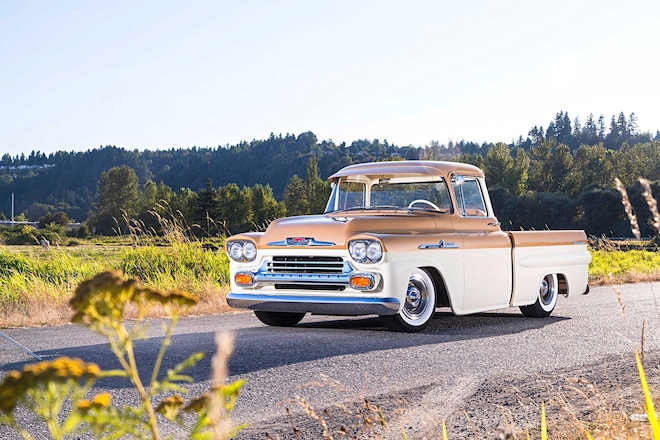 All Jacob Lusk wanted was a cool driver. He and his dad, Greg, even found the perfect candidate: a 1958 Chevy Fleetside. “(We) bought the truck with the intention of throwing a front clip and a small-block in it and driving the wheels off of it,” Jacob says.

Easy enough. Anyone can build a driver, right?

OK, fair enough. So he found one. “I was planning on running the original tri-power with a six-speed,” he notes. Then he found the piece that changed everything: IDA-style throttle bodies. There’s only one problem with those: nobody bothered to make a Weber manifold for a W engine. “So I figured I would just make one out of a solid block of billet on an old conventional Bridgeport mill.” Which, amazingly enough, he did. He even whittled out the rocker covers and the accessory drive!

Of course you can’t just put any old smoker under a masterpiece like that. So he hired Jack Gibbs at 409 Chevy Performance in Willows, California, to build an engine for it. It started as a 348 but it now displaces 440 ci thanks to 4.185-inch Ross Racing Pistons and a 4-inch-stroke Eagle crank. A set of Scat Enterprises H-beam connecting rods link the pistons to that crank. Jack capped it with Edelbrock heads and poked it with a COMP Cams 4800014 camshaft.

Dave Ehrlich in Diamond Springs, California, tuned the Holley HP ECU, which commands the throttle bodies and the MSD Streetfire ignition. The engine makes a stout 625 lb-ft of torque at 2,500 rpm and 550 hp at 5,500 rpm.

Then there was a bigger problem. “Now the motor was getting so nice, other things started to follow,” he says. Rather than graft an F-body clip to the existing chassis, Jacob exploited his position at Art Morrison Enterprises to build one of his own. Builders take note: he stretched the wheelbase 1.5 inches to center the front wheels in the wells. The chassis has the Morrison-standard IFS with a Hellwig antiroll bar and four-link rear suspension. Each corner got a Strange Ultra coilover with PAC spring and a Wilwood 12-inch rotor and four-piston caliper.

Jacob then built the pedal assembly. Rather than use a larger vacuum-assist booster, Jacob used a slimmer (and more powerful) Hydratech hydraulic-assist unit that runs off the power-steering system.

RPM Transmission in Anderson, Indiana, built the T56 bolted to the engine. That in turn spins an aluminum Dynotech driveshaft which drives a 4.30:1 gear on a True Trac limited-slip carrier in a Strange 9-inch housing. Jacob also built the 1 7/8-inch headers and the entire 2 1/2-inch exhaust system. And when we say entire, we mean he also built the chambered mufflers himself. Yeah, he really did. And it sounds great.

“So now it has a cool engine and a great chassis, I couldn’t leave the typical cancer and previous poor repairs in the cab and bed.”

You see where this is going.

He stripped the cab. “I was intrigued by the gold paint that I was starting to find underneath everything,” he says. A search for a gold 1958 pickup revealed that he had one of the specimens that Chevrolet produced to commemorate General Motors’ Golden Anniversary. While the Golden Anniversary passenger cars are well documented, the pickups aren’t. In fact the Anniversary Gold Poly and Honey Beige colors don’t appear on the commercial color charts, only the passenger-car color charts, making such combinations special-order.

Jacob sent the body down to Metalworks in Eugene, Oregon for dip stripping. The body remains stock save for stretching the fenders downward to match the bottom of the bumper. Jacob flipped that bumper, shaved the fasteners, and tucked it closer to the body. He shaved and tucked the rear bumper to match and profiled it to wrap around the bed corners, making a custom rock guard to go between it and the bed. A set of folding irons that Jacob built tuck between the bed and gate. He also fabricated the latches and release handle.

Guided by Alan Donald at Byers Custom and Restoration, Jacob straightened and prepped every piece of the body. “It took me a solid year of diligently working nights and weekends to do all of the bodywork,” he notes. He painted it in his home garage on Christmas 2015 using the PPG DBC system. Renton’s Michael Munoz striped the color breaks.

Once the body went back on the frame, Jacob measured for rollers. The wheels measure 15×7 with 3.5 inches of backspace and 15×8.5 with 4 inches of backspace. They mount 225/70R15 and 255/70R15 BFGoodrich Radial T/As modified for whitewalls by Diamondback Classics. The trim rings are a story unto themselves. They were intended for the 1957-1959 Cameos and as accessories, so they’re not exactly common. And these N.O.S. ones turned up the way all great finds do: while he was looking for other parts.

To make the cab roomier and more comfortable, Jacob fabricated the seat frame. Jamie McFarland at McFarland Custom Upholstery in Puyallup shaped the foam and trimmed it in cornhusk- and fudge-colored vinyl. Jacob made the door panel and headliner skins and he and Munoz trimmed them in the matching vinyl. Tim and Scott Divers at Divers Street Rods in Sultan, Washington, showed Jacob how to shape the German square-weave carpet.

By now it’s pretty obvious that Jacob has a problem drawing lines. But it’s a problem we’re OK with. And frankly, so is he. I mean how many of us open the door to find gold in their garage?