Newsletter
Sign Up today for our FREE Newsletter and get the latest articles and news delivered right to your inbox.
Home » Fourth Time Around For This 2001 Chevrolet Silverado 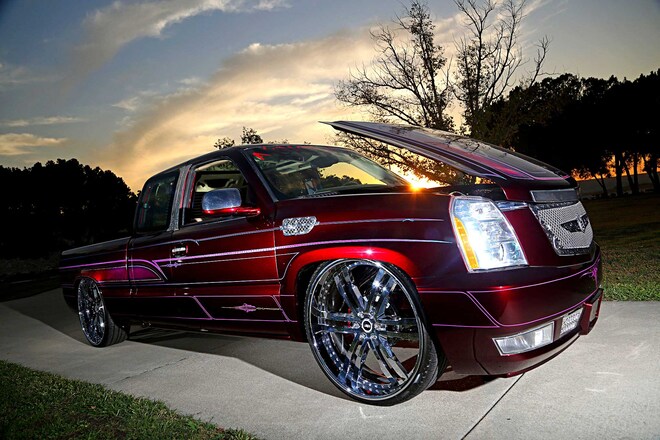 Ask anyone who has customized a few cars as to which project they liked best and they’ll probably tell you: “The next one.” In essence, building custom cars is about reinventing yourself; and the only chance you’ll get to execute those new plans is by starting another project. It’s what we live for, it’s what we do, and it’s exactly the case for Ernie Enciso from Victorville, California.

It was about 10 years ago when Ernie was looking to start a new project and he didn’t have to look far. His friend was selling a 2001 Silverado so he wasted no time picking it up, and what you see here is the final culmination of many failures and plenty of headaches.

Back when he initially took ownership of the truck, his first custom paintjob was done in pearl white but after a bad chemical reaction he was forced to strip the paint and start over. The second time around he decided to paint the truck a candy orange, but by year’s end it had already faded, so he was assed out once again.

Frustrated, but not one to give up, he went for a third attempt, but this time he went with a Brandywine. More than happy with the results, he sent the truck out to a few more shops to get some work done but upon getting it back the paintjob had been damaged. Feeling as if he couldn’t catch a break, Ernie says, “I was looking at all my chrome parts and how good everything [turned] out, and I didn’t want all that work to have been done in vain.” He decided to go at it one more time and since he was a fan of Brandywine, he had Mojave Paint and Body do the repaint. Once cut, polished, and waxed, he contacted the legendary Mike Lamberson to add some of his signature patterns and ‘striping.

With an updated Cadillac frontend and a fresh set of 28-inch wheels, the new look towers over the competition. It’s a detailed ride that’s got plenty of mods and with his frustrations replaced with joy he’s looking to take things to the next level by adding even more.