Newsletter
Sign Up today for our FREE Newsletter and get the latest articles and news delivered right to your inbox.
Home » An Even Trade Produced this Badass ’59 Chevy Apache 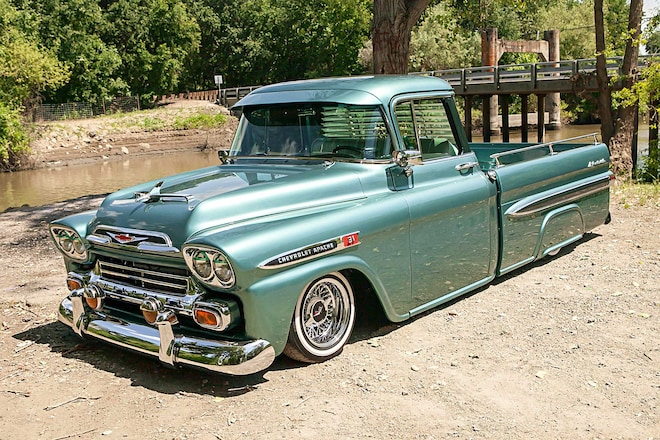 Building a lowrider is a tedious task. It will test your patience, your dedication, your ability to stay focused, and it will put your family, friends, and finances to the test. But before all of this happens, building a lowrider typically starts with confusion. Long before you start worrying about who, what, and how much things will cost, the first order of importance is finding out what exactly you want to build.

We’ve all heard stories about guys losing interest in a project and then starting all over again, and this is exactly the case with Luis Ramirez. After seeing his friend’s white and red Apache, Luis had serious doubts about continuing the build of his 1954 Bel Air. The doubt was so strong that he stopped working on it and started scouring the Internet for what would now become his dream truck. After searching high and low for the perfect truck, he came across a 1959 Apache that caught his attention. With nothing but hope and a little bit of luck, Luis reached out to the seller to see if he would be interested in doing an even trade for the Bel Air. Since they were both in equal condition, the owner went for the deal and Luis landed himself a truck that would soon be turned into the incredible time machine you see here.

Once the Fleetside made its way home, Luis and his father began to take the truck down to bare metal. They addressed rust issues, replaced the necessary panels, and in the end the only things left were the bedsides, front fenders, and hood. While replacing the rest of the body parts, they opted for a big back window on the cab and once it was retrofitted they slapped the frame on a rotisserie where it was prepped and painted black.

During the revamp, they played with an independent front suspension setup, bolted up a four-link rear, and then mated it up to the 700R transmission, which was bolted to a 350 crate engine with Ramjet fuel injection. The addition of CPP brakes helps stop this beast, all the while sitting in a majestically revamped interior that was done by Ciadella Interior using N.O.S. fabric and a 1959 Impala theme. Once complete, a gravity feed setup was installed by Hoppo’s Hydraulics while HCAT built a custom 1956 Bel Air in-dash color bar. Additional amenities include stainless steel pieces on the cab and bed, a new visor, skirts, as well as foglights and spotlights. For those in the know, they may recognize the addition of a 1955-1956 accessory hood bird, the 1958 El Camino bed rails, and rear splash aprons.

In all, the build took three years and two months to complete, but thanks to his parents, brothers, and family, the truck is not only the latest addition to their family, but a keeper of memories that they all get to enjoy.