Newsletter
Sign Up today for our FREE Newsletter and get the latest articles and news delivered right to your inbox.
Home » House of Kolor Sunrise Orange 2005 Chevy Silverado 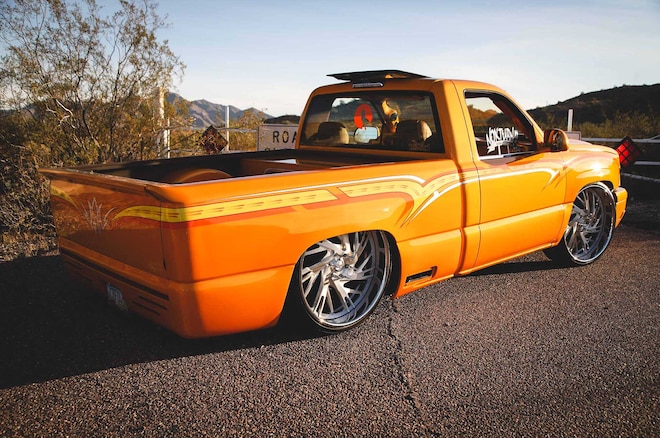 As many car builders know, a project can evolve into something much more meaningful than a rolling work-of-art. As the moving parts come together on a lowrider, so does the personality of the car. Such was the case for Luis Rodriguez, or Chandler, AZ. As he began customizing his 2005 Chevy Silverado, the meaning behind it grew into a tribute. As his second build, Luis took on this passion project as an opportunity to be more involved with his club, Nokturnal. With the help and guidance of his younger brother Jose, this truck’s purpose soon became a tribute to Luis’ father-in-law, who had recently passed away. This was going to be a standout show truck that would bring together Luis, Jose, and both their sons.

The brothers sought help from Andre Garcia to install the Accuair VU4 bags with 480 compressors and switch speed control. Michael Flores in Chandler then completed all of the bodywork at Phat Boyz Customs. There, this Silverado would have a roll pan and sunroof installed.

After extensive body modifications, the exterior would be painted with House of Kolor Sunrise Orange in a pearl finish. Patterns were created along the sides, hood, and tailgate with the orange pearl fading into a yellow pearl along with intricate pinstriping in maroon and melon colors.

The truck was then sent to Vasquez Upholstery in Phoenix to give it a saddle brown vinyl interior, fiberglass center console and Billet Specialties steering wheel. Taking the customization even further, extensive engraving was done throughout the truck by Krazy Kutting and Leonel’s Car Audio installed an X-Fire sound system.

Finally, Luis would get to the “make or break” moment of the build and mounted a set of 26″ Asanti wheels to finish off the show truck.

With so much attention to detail being paid, Luis was heartfelt and influenced by the recent passing of his father-in-law, who had taught him so much. He named the truck after a favorite song of this father figure, “El Rey” by Vicente Fernandez. With such a regal name and emotional bond to a loved one, it’s no wonder this Silverado means so much to him.

There are a few different ways to put together a Top Lowrider Truck Builds list, whether it’s opinion or accomplishments. But rather than argue back and forth we decided to let you, the fans decide