Newsletter
Sign Up today for our FREE Newsletter and get the latest articles and news delivered right to your inbox.
Home » Chad Fincher’s Slammed 1950 Chevy 3100 Truck 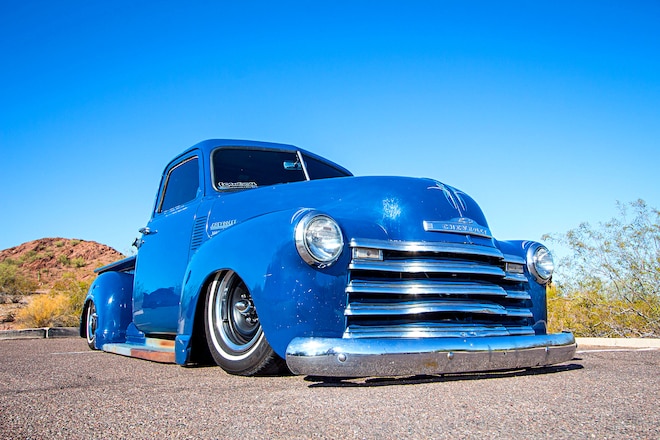 Chad Fincher, from Phoenix, says he first obtained the truck from his grandparents. His grandfather had done a mini restoration on it in the mid ’90s and then parked it in their barn out in New Mexico where it sat for quite some time. Chad had bugged his grandfather for 12 long years about giving him the truck. Eventually Grandpa finally gave in and made a phone call to Chad asking him to come pick it up!

Once Chad had the truck back in Phoenix, he took it over to Todd at Lowboy Motorsports to get the truck back on the road. Todd is a fellow club member and as far as Chad is concerned, is one of the best builders out there. The club founder, Courtney “Tito” Halowell, was in the process of building a Chevy when he suddenly died. This hit everyone in our club and our scene very hard. As Todd and Chad were going through this build, they would stop and look at the progress and wish that Tito was still around to see how it was coming along. They knew how excited he would be with the build and could almost hear his motivation pushing them forward. It was just another part of the “family theme” that was going on with this build. Between getting it from Chad’s grandparents and then the support and motivation of his truck club family, it really pushed him to build an awesome truck.

Todd’s custom suspension components were installed and equally important for both Todd and Chad was to use the truck’s original frame. In addition to the suspension, the LS engine swap, power steering and power brake upgrades, air conditioning unit installation, and an amazing interior from BW Upholstery, Chad just couldn’t be happier with how the truck ultimately came out.

Now that it is done, Chad takes pride in the fact that he drives it to the shows and he’ll even pull it into daily driver duties when needed. Chad says it is amazing to see the facial expressions that people give when the old truck passes them on the freeway!

Chad thinks of himself as not really that “exciting of a guy,” but he does try to be a good person, build cool stuff, and just be a good example of our sport and lifestyle to people both in and outside of it.

Body/Paint
Chad’s own grandfather did the bodywork and paint during a minor restoration project on the truck in the ’90s.

Suspension
Todd Burton of Lowboy Motorsports in Mesa, AZ, installed an airbag suspension with independent front suspension consisting of 1995 Chevy spindles and a custom rear dual-wishbone four-link suspension. Full AccuAir management with ViAir compressors and Slam Specialties airbags. A rack-and-pinion and power steering were also installed. Disc brakes were installed up front. The bed was raised to give room to the lowered rear suspension.

Sound System
The hidden audio system consists of a Bluetood Kenwood head unit and Kenwood tweeter, midrange, and woofer speakers, all installed by Chad himself