Newsletter
Sign Up today for our FREE Newsletter and get the latest articles and news delivered right to your inbox.
Home » Building Orange Crush, a 1953 Chevy 3100 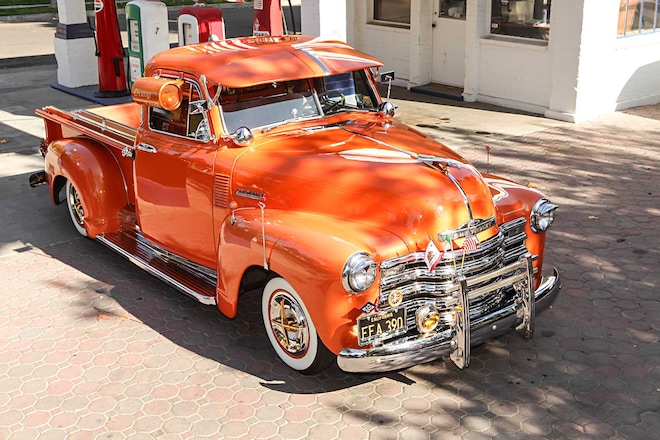 Throughout Raymond Pineda’s adolescent years in Orange County he was constantly in awe as he witnessed the cars cruise down the neighborhood. It was no surprise that soon Raymond aspired to own a bomb. In 1986 when Raymond moved to Fresno he realized his dreams of owning a bomb would soon become a reality when his brother gave him a project 1953 Chevy bomb truck. Raymond’s daughter Natalie absolutely fell in love with the truck, which ignited the motivation to restore and revive their newest challenge.

Once they established a set plan, their main priority was choosing the perfect color. Both Raymond and his family agreed on the orange as a tribute to his hometown of Orange County; little did they know that choice was the birth of “Orange Crush.”

In 1989 the truck was painted orange with a gold pearl. After the paintjob was complete Raymond wanted to pinstripe his freshly painted truck, which led him to “The Kid Greg” where he pinstriped gold and brown details. Later Raymond took his chrome to Morenos, a locally owned chrome shop in Fresno.

Once the truck’s exterior met Raymond’s standards he began focusing on accessorizing. Luckily for him his brother, David, blessed him with many accessories, like a compass, banjo steering wheel, push-button radio, and a record player. The building process was going smooth as ever, but unexpectedly on June 24, 1993, the build came to an abrupt end as the motivation behind the build, his daughter Natalie, died. The truck’s restoration was put on hold for multiple years up until one day Raymond’s son, Angel, began taking interest in cars and began encouraging Raymond to finish the build so they could attend car shows together. This is when Raymond resumed his build and began to upholster his interior; he chose a colors beige and tan.

With a recently completed truck, Raymond thought up the idea of custom bedrails, which were made by Marcos Vargas and Manuel Mata. Also, David created custom pipes for his new trucks. With the “Orange Crush’ being completed Raymond often finds himself attending car shows with his car club, Oldies, which he has been a member of since the early ’90s.

Natalie, during the build, had high hopes for the truck; one of those hopes was being showcased in LOWRIDER magazine. Now her granddaughter, little Natalie, will get to see her grandmother’s hopes and aspirations come true. Raymond Pineda would like to thank and acknowledge his Lord and Savior, as well as his family for their support, encouragement, and patience.

In loving memory of Natalie Pineda.