Newsletter
Sign Up today for our FREE Newsletter and get the latest articles and news delivered right to your inbox.
Home » Building a ’54 Chevy 3100 He Can Pass Onto His Children 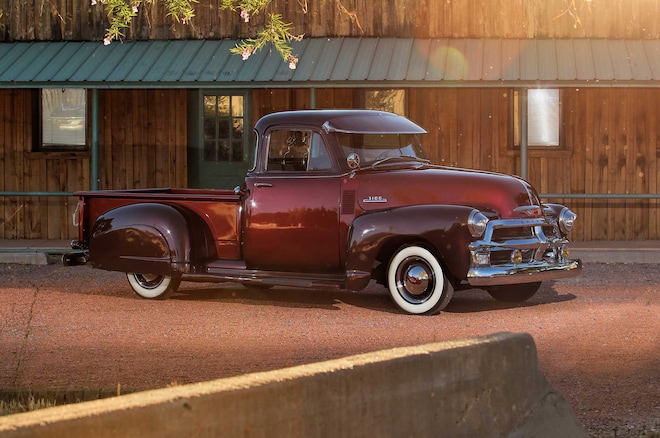 Looking back we could share stories about the cars our parents owned, all the while wishing they had handed them down to us. These are the same stories that could be shared with photos of our favorite road trips. For Steven Chavez, his memories of cruising around with his family were great, but in the end he never became the recipient of the family’s 1963 Impala. Instead he did acquire something more meaningful-the love of classic cars, specifically lowriding.

Fast-forward to present day and Steven is now the owner of this superclean pickup; it’s come a long way from where it started. Prior to purchasing the truck, he wanted to find something that he could pass onto his future kids and that’s when he spotted a 1954 Chevy longbed. The truck had seen better days and despite the faded turquoise paint and white bumpers he saw the truck’s potential and did the deal.

Months after cruising the truck as-is he disliked the long bed, so he started tearing the truck down while looking for a donor truck. Not wanting to skimp on the build, he opted for a frame-off restoration. But with a budding family, he was having enough trouble finding time let alone the money to get it done. As months passed, the project crawled into action but once he finally found a donor truck it was game over.

Starting with the new shortbed chassis Steven completely rebuilt the truck along with all the running gear before transferring the cab and front sheetmetal. Once the truck was rolling it was time to get the outside looking as good as the undercarriage, so he took the truck to Louie Brito for bodywork. After what seemed like an eternity, it was time for Steven to pick colors for his new classic and he decided to go with a Black Cherry on the fenders and a Spicy Merlot for the rest. Once the truck was back from paint and all the freshly chromed pieces were installed it was time to start making memories with the family who backed him all along.