Newsletter
Sign Up today for our FREE Newsletter and get the latest articles and news delivered right to your inbox.
Home » A ’51 Chevrolet 3100 Called “Humble Green” 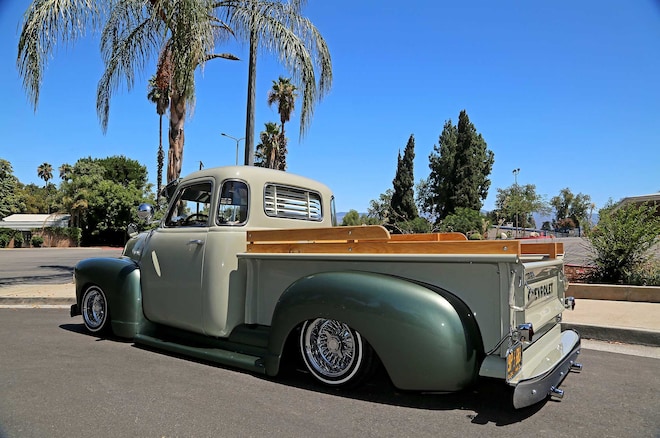 The 1951 Chevrolet 3100 pick-up truck is from Chevrolet’s Advance Design Series—a truck billed as a larger and more refined version of the earlier AK Series. While it remains a historical part of Chevrolet’s heritage, this truck would go on to be the iron horse of America’s workforce, but for Richard Almanza Jr., the truck his dream ride. It was the topic of many discussions he’d have with his brother-in-law Tato, and for Richard, the ultimate model was the five-window.

Those recurring conversations ultimately led to Tato calling Richard to let him know that he located one in Redlands. “He told me that it was in pretty bad shape and would need a lot of work but I didn’t care. I went to go see it for myself” says Richard, and at first sight, Lalo was dead on right. The floors were rotted out, it needed extensive metal work, but that didn’t stop Richard from seeing the grand vision so he struck a deal for $1,700 and they brought the truck home.

The first thing he did was replace the original 216-engine with a rebuilt 235. A metal fabricator by trade, Richard went straight to work and replaced the floor panels, retrofitted a Mustang II front suspension and Z-notched the frame. From there, an air ride setup was installed along with new wheels and tires, and he took to the streets to give it a long term shakedown.

After three years of enjoying it with the patina finish, it was time to send it out for a revamp so he contracted Classic Car Refinishers (Rialto) to lay down a two-tone paint job using kiesel gray on the cab and bed, while an estate green was applied to the fenders, rockers and visor. Months later, the truck was done and ready. It was exactly what he had envisioned and he was excited to show it to his brother-in-law; but that moment never came as Tato was involved in a fatal motorcycle accident the very same day. Because of that, Richard decided to name the truck “Humble Green” to pay homage to him and embrace its unspoken sentimental value.

Interior
Vinyl and tweed in beige and brown.