Newsletter
Sign Up today for our FREE Newsletter and get the latest articles and news delivered right to your inbox.
Home » 2005 Ford F-150 – You’re Alive, But Are You Living? 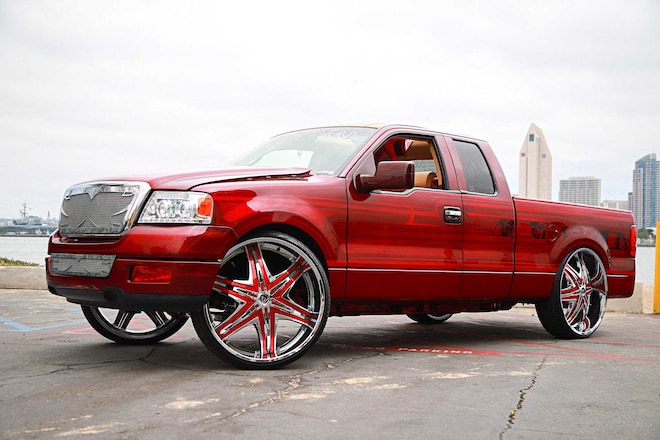 Just like the wild wolves that emerge from the darkness of the night, “La Loba” proved to be resilient and indestructible just like her owner after an unfortunate accident in 2012. Car enthusiast Jamie Ramirez was almost paralyzed from the harrowing ordeal, but luckily, he was spared along with his family who happened to be cruising with him that fateful day. He didn’t give up on the truck nor his hunger to succeed after suffering the scare. Jaime took the experience as a wake-up call and he poured all of his energy into restoring the 2005 Ford-150 into a better version of itself.

In the two years following the accident, Jaime took the stock truck he purchased from a friend and added his own custom twist. While the original engine and transmission remained minimally unchanged, he added a custom-engraved engine cover to bring out the beauty of the engine bay. He further enhanced the visual aesthetic by installing an engraved cutout roof glass on the top of the truck. The F-150 sits on 30-inch Diablo Elite wheels and features airbags. The finishing touch was the candy colored paint in Brandy Wine, with a touch of patterns, pinstriping and murals along the sides to really make it pop. From there, Jaime sent the truck to Andres Upholstery to receive its two-tone interior with custom diamond stitching. Although he’s satisfied with the end result, Jaime says there’s always room to keep the truck’s design evolving to keep it fresh and show- ready.

The part of the build was that it was entirely done by Jaime’s very own shop, JA Auto Body and Paint, which he launched in 2013. Following the accident, Jaime sold two other vehicles he owned, retired from his construction job of 16 years, and invested every dollar into his dream custom shop where he spends most of his days when he’s not enjoying quality time with his family. Now, he focuses his efforts and passion for custom cars into making other people’s dreams a reality.

Jaime rides through the streets of San Diego with Nokturnal Car Club and regularly competes in car shows. Two of his four children share the same love of cars as Jaime and enjoy going along for the ride. Jaime credits his success to the endless support from his family and his faith.