Newsletter
Sign Up today for our FREE Newsletter and get the latest articles and news delivered right to your inbox.
Home » 2003 Ford Explorer – Peer Pressure 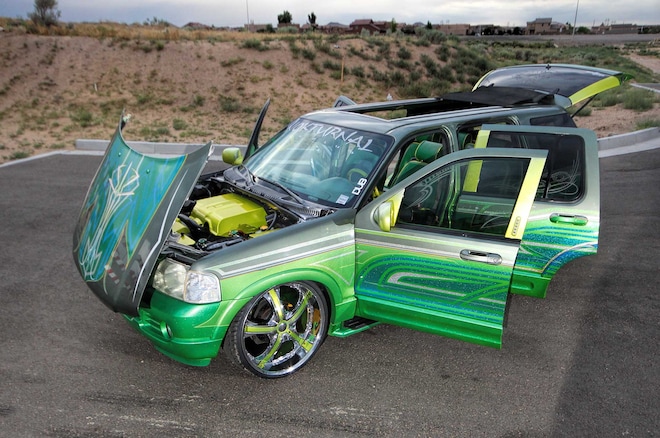 Monica Candelaria-Wright grew up around custom cars her entire life, and much of that exposure is thanks to her husband, Chris, and his friends who have all been longtime car fanatics and customizers. After spending years at car shows with the family, Monica no longer wanted to be a spectator and roll in shotgun. She wanted to be a player and drive her own custom rig, and that’s why she decided to recreate her 2003 Ford Explorer.

It’s a clean machine and a huge canvas, and the first thing that catches your eye is the one-off paint scheme designed and laid down by Big V. Designs. Once the body was prepped and ready for paint, Big V shot a gray base and followed it up by misting multiple layers of flakes and Candy colors to create this striking spray-down. Once the paint was cut and polished, Monica then had Big V hit the interior with a full makeover including the use of seven TVs and four 12-inch Pioneer subwoofers in a custom enclosure. The final touch was to tuck the new 24-inch Luxury wheels, so a new air setup was done by Show-N-Go Automotive.

Now that Monica’s SUV is done and show-ready, she not only gets to show with the family, but alongside her fellow club members as she is now a part of Nockturnal Car Club. It’s a superclean ride that she’s proud to have built and one that the entire family can now enjoy.