Newsletter
Sign Up today for our FREE Newsletter and get the latest articles and news delivered right to your inbox.
Home » 2003 Chevy Silverado – El Patron 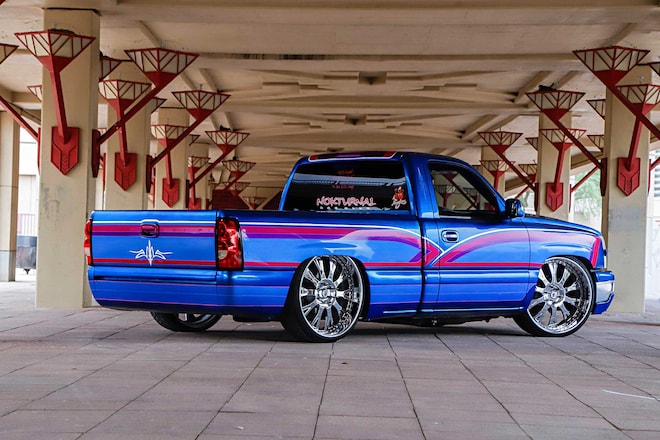 One of the highlights of turning 16 years old is knowing that right around the corner you’ll be granted a pass to freedom, and that freedom comes in the form of a driver’s license. But ask Josue Rodriguez of Chandler, Arizona, and his story is much, much different. You see, not only did he already have his driver’s license, but he was already a member of the Nokturnal Car Club. He initially joined the club with a 1999 Chevy Malibu but soon thereafter became interested in a much larger canvas, so he opted for a 2003 Chevy Silverado that was bone stock and ready for a major facelift.

During a chance encounter with Harvey Lopez, one of Arizona’s top painters, would serve as the catalyst for the vehicle’s upcoming transformation. Lopez and crew began by laying down a Midnight Blue basecoat, creating the perfect canvas for the multitude of House of Kolor candy colors, which included various blues, reds, and purples. Bugs Auto Art then tied all the color combinations together by adding miles of pinstriping and handspun silver leafing. The interior was given a complete makeover as well. The original seats were covered in a dark blue vinyl while purple suede inserts with double stitching bind it all together. While the set of custom chrome Asanti FS staggered wheels were being delivered, Clemente Customs was installing a complete Universal Air airbag system with two compressors and six switches. The truck eventually included many other upgrades and details, some of which include engraving to the side mirrors/door handles as well as a completely upholstered bed compartment.

Now 24, Josue just completed his second build and is already setting his sights on the third. “Thanks to each and every one of you who lent a hand during this last project,” Josue says. “More importantly, to my beautiful wife, Verenice, thank you for always supporting me in what I do.”

Body/Paint
Midnight Blue base with a multiple patterns of red, purple, and baby blue candies