Newsletter
Sign Up today for our FREE Newsletter and get the latest articles and news delivered right to your inbox.
Home » 2003 Chevy Blazer Xtreme – An Extreme Build 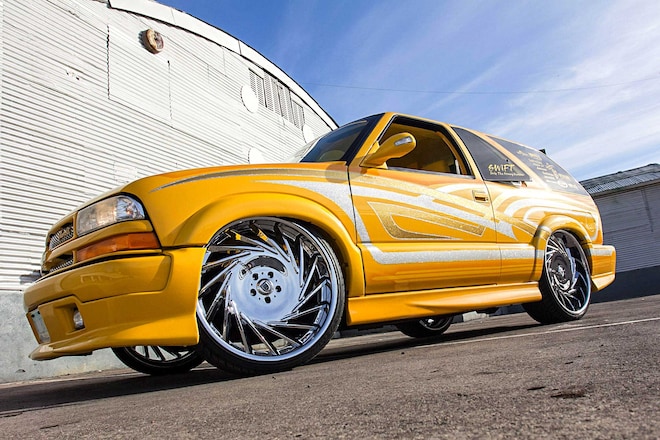 Building a custom vehicle has many gradual steps. Along the way, each of those steps teaches us a valuable lesson, and those lessons help us graduate from entry-level, single-stage, original interior builds to full custom creations featuring patterned, flaked-out paintjobs with custom interiors.

For Pobre Aguirre of Arizona these lessons began as a youngster while he was building model cars. As time past he moved onto fullsize cars, and that ultimately led to the creation of this masterpiece you see here. When choosing a platform to build on, his affinity for the Chevy Blazer “Extreme” led him to go through this process, which many of you have or are currently going through.

“I always had big dreams for this car,” Pobre says. Little by little he would do whatever modifications he could to the Blazer, and the first time around the vehicle mods were minimal and sported nothing more than a Brandy Wine paintjob with custom rims. Knowing that the wanted to get to that next level, he knew the next reincarnation had to be drastic. “I wanted a paintjob that popped,” Pobre says. And so the decision was made to cover the Blazer in a custom blend of vibrant Canary Yellow with gold pearl, intricate patterns of silver and gold flake, as well as pinstriping.

The color scheme carried over to the interior with a custom fiberglassed dashboard, door panels, center console, and speaker box that accented the leather yellow seats with diamond inserts. With the numerous TVs, MTX speakers, and Pioneer head unit all wired up, one of the last steps for this build was to change up his wheels to a set of custom 24-inch Asanti wheels wrapped in 245/30-24 Lexani tires.

When asked about the final build, his response was “I’m glad I didn’t have to go through this process alone.” He was also quick to mention that many people were involved in the build, but in the end it was his wife, Geneva Wilson, that he would like to thank most of all for all of her support.