Newsletter
Sign Up today for our FREE Newsletter and get the latest articles and news delivered right to your inbox.
Home » 2003 Chevrolet Silverado – The Ultimate Pick Up Line 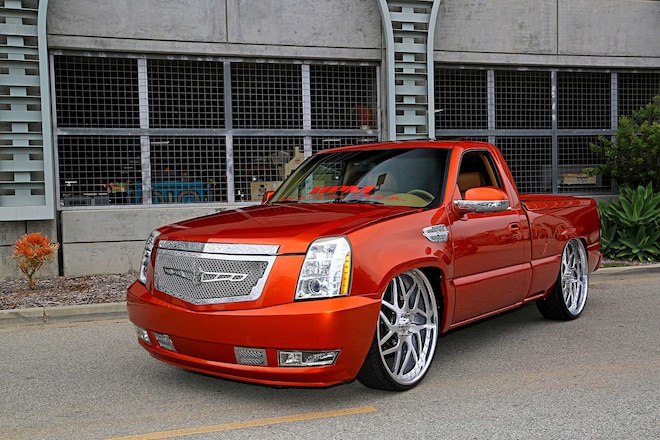 Alex Manzo had been in the car scene for a decade, but during that time he never had a full-blown show truck like the one he now owns. It all started when he dropped $6,000 on a 2003 Silverado; from that point on he knew that he was all-in.

The build began with a front end conversion using a 2010 Cadillac Escalade fascia. Once the bodywork was dialed in, his next step was to choose a color-a task that wasn’t so easy. At the time he didn’t know whether to go with candy or pearl and then there was the dilemma of choosing between apple red or purple. After much debate and research he decided to go with a Cinnamon Pearl. Once it was painted he knew he’d made the right decision.

When it came time to address the interior he wanted to keep the theme going, so he had a 2010 Cadillac Escalade interior fitted. Once a test-fit was done it was removed and wrapped in a peanut butter vinyl to complement the pearl found in the paint. Next on the list was to throw in a massive sound system that includes four massive ‘woofers, which are housed in a custom fiberglass enclosure that occupies the entire bed. It’s there you will find the ‘woofers and the airbag setup. While he’s happy with the outcome he also didn’t realize the amount of upkeep it would require. Needless to say, Alex is happy with his decision but he did mention that if he had to do it again he’d definitely cut down on the custom fiberglass work. That said, this truck might be a pain to upkeep, but for us it’s a visual treat that proves once again that it costs to be the boss.