Newsletter
Sign Up today for our FREE Newsletter and get the latest articles and news delivered right to your inbox.
Home » 2003 Chevrolet 1500 Silverado – When Opportunity Noks 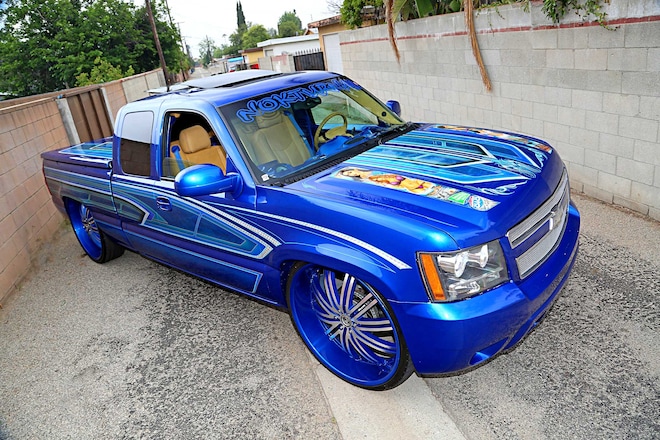 High school is a trivial period in life. It’s nerve-racking, fun, and a time to educate ourselves, a time to form friendships, and, at least back then, it was a time we all eagerly awaited our driver’s license. A driver’s license meant freedom, it gave us the ability to roam freely, but for Jesse Aguilar it also became a time to express his creativity, thanks to a 2003 Silverado that his brother gifted to him.

The 1500 Silverado was all original with a sound system. Jesse’s goal was to slap on a set of custom wheels and call it a day, but that never happened. Instead, his truck became a full custom showpiece that all started when he ran across a gathering of trucks with large wheels. “[Their trucks] caught my attention so much that I had to pull over and see what was going on,” Jesse says. That fateful day, what he stumbled upon was a Nokturnal Car Club meeting. At that very moment he knew then that he wanted to be part of the crew and in 2009 he was recruited into the club after he added a set of 26-inch wheels. From there, he attended his first car show with the crew and as they began showing him the different categories and levels of customization, he was inspired and latched onto the looks of full custom trucks.

In total, the transformation of his truck required a handful of shops, but as years passed Jesse continued to add onto his original plans, spending most of every paycheck he received. “There would be weekends where I wouldn’t go out, so I could save to finish my truck,” the proud owner says, but his persistence and money management skills won, and in the end none of this would have been possible without his brother gifting him the truck and the support of his wife (then girlfriend) who not only stood by his side but supported the long nights and late hours spent building one hell of a truck.