Newsletter
Sign Up today for our FREE Newsletter and get the latest articles and news delivered right to your inbox.
Home » 2002 Dodge Dakota – The Eternal Gift 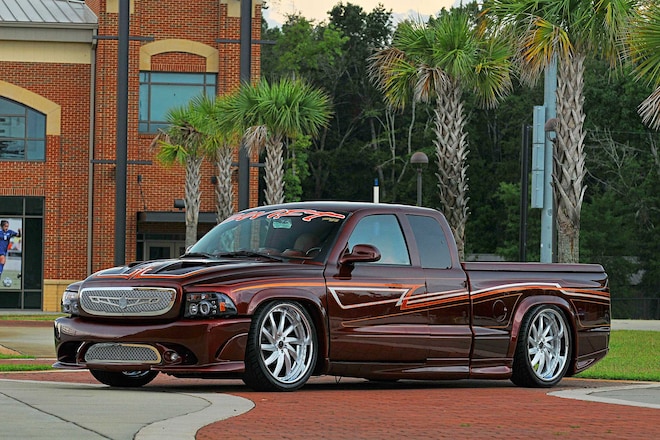 As teens, many of us receive hand-me-down vehicles to get to and from school, but in the case of Justin Ward, he was passed not only a vehicle but also a lesson in love and creativity. As the recipient of a 2002 Dodge Dakota, his grandfather who had originally purchased the truck for himself, gave the truck to Justin and almost immediately he wanted to begin upgrading it.

Seeing Justin’s enthusiasm and love for customization, his grandfather not only supported the vision but invested into it. As a gift, his grandfather surprised him with a custom paintjob on the day of Justin’s graduation. Tragically, the night the Dakota came back home, his grandfather suffered a heart attack and for the next 10 years Justin kept the truck the exact same way it was to preserve his grandfather’s last gift.

Fast-forward to 2017, Justin finally decided it was time to update and rebuild the Dodge. He wanted to do so in a manner that would honor his late grandfather, and to start he drove the truck to the cemetery and had a moment with him. Shortly thereafter, he drove directly to the shop and the process began. In all, the project took roughly six months to complete. Justin tells LRM, “I know my grandfather would be proud of this accomplishment.”

Starting with a new paintjob, Justin had Brandon Nutter at A Couple Buddies Garage redo the paintjob. Enrique from Chavos Pinstriping was flown in to lay down the leafing and pinstripe, and it was off to Mr. Scrape, where the suspension was revamped with air ride suspension and Chris Tom reworked the interior. The last step was the installation of the audio/visual work and that’s when Unreal Customs added a total of seven TV monitors and extensive fiberglass work all throughout the truck.

In closing, Justin wishes to thank his supportive wife, Ashley, for understanding his passion and standing by him throughout the years. He also wants to extend his gratitude to his brothers at Swift Car Club, and his biggest thanks goes out to his grandfather, Jack, for the inspiration and the love he gave throughout his life. And while he may not be here in physical form, Justin knows that his grandfather is looking down with pride and love knowing that his influence lives on.