Newsletter
Sign Up today for our FREE Newsletter and get the latest articles and news delivered right to your inbox.
Home » 1999 Lincoln Navigator – El Gallo Salvaje 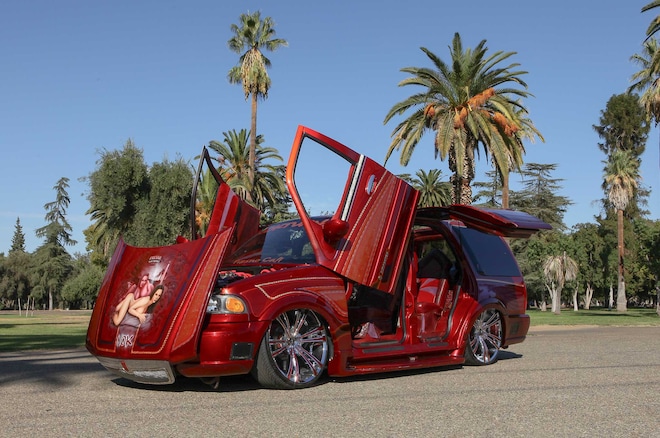 Jose Diaz grew up in the small agricultural farming towns of Cantua Creek, and San Joaquin CA. The inspiration came at a young age shortly after attending a car show and watching those who attended cruise, after this Diaz had found his new passion. His build would consist of a Lowrider inspired paint job with big wheels. After Graduating from high school, he purchased a truck and immediately installed the airbag suspension and some 24″ spinner wheels, that’s when he caught the attention of Nokturnal Car Club and in 2008 he became a member. Now a member of Nokturnal he wanted to redo his truck and in the process of the build he was approached by an old Nokturnal Member Rafa Cervantes who had his Navigator for sale. Jose felt this was a great project and seen a lot of potential in the build so he went ahead and purchased the Navigator putting his Truck aside. Two weeks after purchasing his new project he reached out to Rene from Chofy’s in San Luis Rio, Colorado Mexico to do the body and paint. It took them approximately 10 months to complete, once back from the paint they attended a couple of shows Jose felt like the interior needed to be freshened up so he decided to take it to Nino’s Upholstery of Fresno. They fabricated the new custom royal bucket seats; fiber glassed the entire dash, and speaker box. At the same time Jose and his brothers Jorge, Victor, and Roger where busy adding their touch on how the doors would open and making sure the air bag set up was working correctly. During the off season Jose would end up taking the vehicle to Isaac Salazar from Straight Clowning to add more patterns and stay ahead of the competition. With the new look Jose took it to many car shows all over the west coast bringing home a lot of trophies, after showing his passion and dedication to the club Jose would become president of Nokturnal Fresno Chapter. In 2017 while attending a car show he was rushed to a nearby hospital, two weeks later he would pass away. His brothers to this day show the truck in his memory and you can see the Navigator at all the local shows. Jose had become a mentor to a lot of people and helped guide members down the right path he was always there to lend a helping hand and was always ready to roll. “It was never about taking home trophies it was about all the love and friendships he created along his journey”.