Newsletter
Sign Up today for our FREE Newsletter and get the latest articles and news delivered right to your inbox.
Home » 1992 Chevrolet 1500 – Truckin’ & Tuckin’ 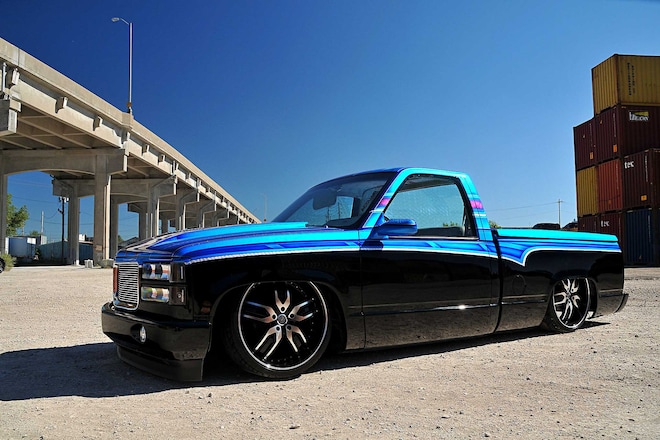 Tyson first became enamored with the truck at 14 when he was employed at a local barn and the owner had the truck on the property. As an avid Lowrider magazine reader, being interested in a truck was certainly out of the ordinary for a young Tyson. His love for that truck grew even larger once he was allowed to get behind the wheel for the first time.

The build started off modestly with some 20-inch wheels and red flames down the sides along with some tweed interior pieces and red stitched flames. For the next 10 years, the Chevy remained in this state while Tyson enjoyed it on a daily basis. In 2014, Tyson decided to take his Chevy pickup to a different level. His first instinct was to give the truck a sport truck theme but his lowrider roots won him over in the long run. The first step in the rebuild was to alter the suspension so the Chevy stance would have a more aggressive style as low as it could go. The decision to go with air over hydraulics was simple: In Tyson’s everyday life, he’s an aircraft mechanic and knows his way around hydraulic systems so he wanted to do something different. Tyson ordered the suspension kit and air ride system from Ekstensive Metal Works and installed the entire kit in his garage.

The 20-inch rims were upgraded to 22-inch Velocity wheels, so the inner fenders had to be altered so they wouldn’t rub. Inside the cab, Tyson ripped out the interior he previously customized and sent it all to No Coast Customs to wrap each piece in suede and leather. While the interior was getting the custom treatment, Tyson decided to change the paint to something with a true lowrider-style feel. He enlisted the skills of Justin “Juice” Cline at Global Parts in Augusta, Kansas, for the unique blend of blues and purples, along with impressive patterns, leafing, and pinstripes.

“Paradox” took 18 years to get to where it is today, which ironically was the age of Tyson when he received it from his father. Although the process wasn’t free from trials and errors, Tyson is confident that every choice that was made on his Chevy truck was done at the right time and done to perfection.