Newsletter
Sign Up today for our FREE Newsletter and get the latest articles and news delivered right to your inbox.
Home » 1984 Chevrolet C10 – La Mamalona 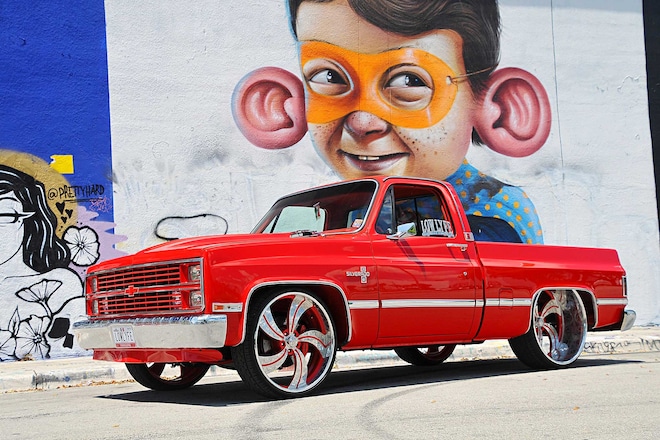 Born and raised in Rio Bravo, Tamaulipas, David “Dee” Espinoza spent plenty of time with his grandfather, Ramiro. While he’s got plenty of great memories with him, his most vivid were the ones spent with his grandpa in his Chevy C10. “I remember him taking me around the farm in the Chevy,” Dee tells Lowrider. “It was one of my favorite memories from my childhood.” And it was these memories that would last a lifetime and give him an affinity for the famous C10 platform.

His story begins when Dee’s family moved to South Florida to start a business called Daniel & Sons—an autobody shop that specialized in custom cars and trucks. The shop gave Dee a chance to work hands-on in the shop, and while Dee’s father and brothers didn’t catch the lowrider bug, Dee certainly did. To date he’s purchased around 15 custom cars that he turned into show cars. Throughout that time, he always kept his eye out for the elusive Chevy C10. It was a truck he wanted, a truck bucket list project and upon his grandfather’s death the search became that much more serious, that much more meaningful, and that’s when he found a 1984 Chevy C10 owned by Mannie Fresh. Following this discovery, Dee would consistently bug him to sell it, and his resilience wound up paying off. “I guess I finally annoyed him enough for him to let me buy it,” Dee says. The deal was done and the truck was driven as-is for the following month.

When he was ready to give the truck a face-lift, he brought it to the shop and began skim coating every panel to bring the body straight. Once it was prepped and passed approval, it was splashed with his favorite color, PPG Corvette Torch Red. Around the same time, Dee was craving a little more power, so he sourced an LS2 from a 2005 Denali and had Luis Castro perform the motor swap.

Although Dee had already built plenty of lowriders, he had different plans for the classic truck. He had a taste for the Texas-style billet wheels and wanted to add them to a lowrider-style vehicle. To accomplish that, he purchased billet Intro wheels and had Big Rick from Hialeah add his custom touch by engraving the wheels and every chrome addition on the Chevy. Once the wheels were mounted, Dee found out quickly that the rearend needed altering to fit the wider wheels, so he shortened the rearend and added a four-link with coilovers to accommodate the reverse-lip 28x12s.

During the build, the body was pulled from the frame where everything was powdercoated and the belly was rhino lined along with the bed. Dee added 3-D lettering of “Low Lyfe” to the bed showing his car club pride. A 2-inch drop was added to all four corners bringing the Chevy lower but still at a safe ride height. Nunez Brothers Upholstery then flipped the interior by fitting it with yards of red leather and suede with some billet accents while Ultimate Customs fitted 12-inch Kicker subwoofers behind each seat.

The Chevy C10 is the first truck in Dee’s fleet and probably the most proud he’s been of any of his vehicles due to the level of nostalgia the truck gives him every day. He wishes to thank God because without him he wouldn’t be in his present position. He wanted to thank his beautiful wife, Lidya, and their four kids, Daya, Mary, Yela, and Lil Dee, for all their understanding and support. He would also like to thank his club members and Low Lyfe family for their support through all the late nights. His grandfather is most certainly looking down with pride at Dee’s hard work and dedication, making “La Mamalona” one of the baddest trucks in South Florida.