Newsletter
Sign Up today for our FREE Newsletter and get the latest articles and news delivered right to your inbox.
Home » 1963 Chevrolet C10 – A Teacher’s Influence 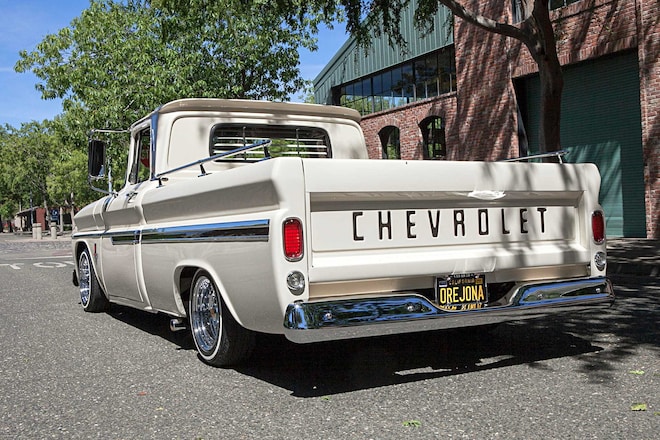 Turning a wrench came naturally to Salvador Mendez. When he was a kid, he remembers working on the family cars, and by the time he reached high school, he refined those skills by enrolling into an autobody class. Further honing his ability to do paint and bodywork, it was during his senior year at Yuba High School that Mr. Anderson (his autobody instructor) let him paint his 1964 Chevy C10 Stepside. For Sal, it was another project to add to his portfolio, but when his instructor let him drive it back to school, it only took Sal five minutes to know that this was going to be a car on his bucket list.

A few months after graduating high school he moved to Phoenix Arizona to attend Universal Technical Institute (UTI), and after he was done, he moved back to Yuba City where his search for a C10 continued. A year and a half later, his coworker Luis Ramirez decided to sell him his 1963 Chevy C10. The truck had no running gear, had very minimal rust, but soon it would be retrofitted with a 2003 LM7 LS engine and mated to a 4L60E transmission.

Before dropping the motor back in, Sal shaved the firewall and the modifications carried on to the interior where Sal illuminated the heater controls, ashtray and radio. The interior was then rewrapped at Ciadella, and if the patterns look familiar, it’s because they used the same style fabric found in the 1963 Impala.

Better stance comes by way of a mini C-notch complete with drop springs and a CPP sway bar in the rear. Up front, he installed a CPP disc brake conversion kit with drop spindles/drop springs and then upgraded the sway bar to a 3/4-ton unit for better handling. With the truck mechanically sound, it was time for paint. Although he originally wanted to shoot it flat black, he opted for a Harvest Moon Beige. Along with his friend Luis, Sal disassembled the truck, prepped it for paint and painted it in Sal’s garage during his lunch breaks. Sal would tape everything up the night before, and the next day he’d come home during his lunch break to spray the primer sealer and basecoat. From there, Luis would show up on his lunch break and finish the basecoat and spray the clear one section at a time until it was all done.

Once reassembled, a set of 14-inch Dayton wire wheels were hammered on, and the final touches come by way of some big West Coast mirrors that took about one year to find as well as some bedrails. In all, the build took 3 and 1/2 years to complete, but as he looks back, it’s funny to think this all started because his teacher allowed him to take a short drive back in high school.