Newsletter
Sign Up today for our FREE Newsletter and get the latest articles and news delivered right to your inbox.
Home » 1954 Chevrolet 3100 Truck – Paying It Forward 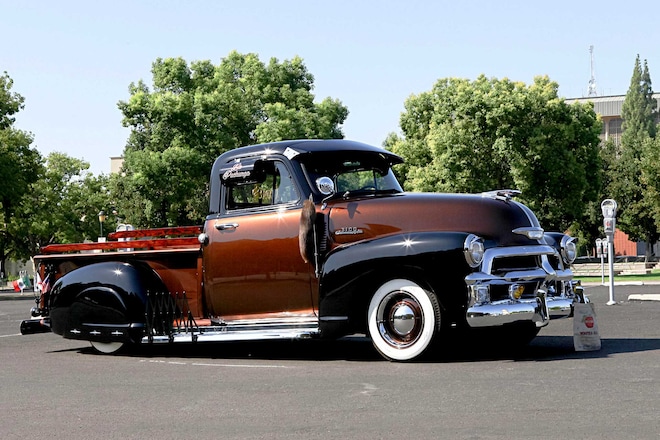 Eric and his mother were searching for a gift, specifically a 1954 Chevy. The truck was going to be a present for Eric’s father as a way of giving back to him. You see, when Eric was younger, he was getting into a lot of trouble until his father decided to gift him with a ’54 Chevy Bel Air. That Bel Air is what kept Eric off the streets, and since the Bel Air has now been completed, Eric wanted to pay his father back and get him a ’54 so that they could build it together.

One day while driving around, Eric noticed the unique front grille of a ’54. It was sitting at a shop’s storage yard, so he got in contact with the owner and within the year, the truck was his. With Father’s Day right around the corner, Eric decided to repay his father by giving him the ’54. The truck was rough but in running condition, but before they could even make a move, bad news delivered itself first. In 2017 before the build even started, his mother, Patricia, was diagnosed with Stage 4 cancer, so Jose and Eric started the build in hopes of finishing the truck in time to have Patricia and Jose cruise in it. They decided to keep the original 235 engine and dress it up with the addition of an Offenhauser valve cover. To get the truck to lay out, an air system was installed beneath the bed to keep a clean look. To access the air system, a touch of a button set off actuators that lifts the center of the bed, and to help the truck lay down low, it was also C-notched. While the chrome was being done at Morenos, Eric blocked and prepped the body for paint. Once the truck was ready, he would shoot black PPG on the fenders and the top, and a Sunset Bronze shot on the body with some gold pearl. Cycle Art Productions added some pinstriping to the cooler and the steel rims were painted to match the body and paired with some 560 Firestone tires.

In all, the build would take them a year and a half to complete. Unfortunately, Patricia passed away, so they dedicated this build to her memory and called it “Puchunga” which refers to the person who gives us feelings of love and affection.