Newsletter
Sign Up today for our FREE Newsletter and get the latest articles and news delivered right to your inbox.
Home » 1953 Chevrolet 3100 Pickup – La Coonster 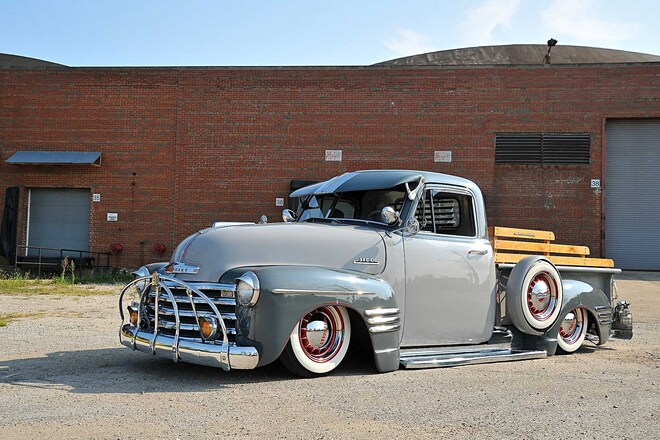 There is nothing more sacred and secure than the bond between a father and son. It’s a ritual built on tradition and a relationship based on senior teaching junior. For some, it’s time spent tossing balls and for others road trips to the mountains, but for Tito Mandujuano Jr. his father taught him about the family’s love affair with classic cars and their passion for lowriding.

As a child Tito Jr. spent plenty of time with his father and Uncle Ricky, avid lowrider enthusiasts. “Aside from my father, my Uncle Ricky was my idol,” Tito tells Lowrider. The one thing he realized was despite family differences between the Mandujuanos, the lowrider culture was something that always brought them together. It was the glue that held the family together and a ground that prevented the buildup of static.

Looking back Tito remembers when his father purchased a project truck in 1997. It was a 1953 Chevrolet 3100 that was in dire need of some TLC and once they relocated to Beach Park, Illinois, Tito’s father and Uncle Ricky were constantly working on the project truck as he sat back in admiration of their mechanical prowess. Unfortunately, Ricky died and to the devastation of Tito the completion of the truck became more of a mission. Fast-forward to 2011, Tito had graduated high school but instead of taking that truck for the first cruise, he enlisted in the Marines and was gone.

Tito spent six years in the Marines and during that time he was stationed in Okinawa, Japan, as a transport operator, the Dominican Republic, China, and even spent a year as a Marine security guard for the United States Embassies. “There wasn’t a time I couldn’t wait to get home and turn the key,” Tito says. “I couldn’t stop thinking about it.” During that time his father stored the truck in the garage eagerly awaiting his return, and upon his return the first thing he did was just fire it up and drive it around the block.

Over the course of six years there needed to be some work to make it perfect. To begin, the first step was getting the stopping power on point, so Tito and his father added a complete Mustang two-disc brake kit as well as stock drum brakes. The stock three-speed transmission was removed and replaced with a T5 transmission and an open driveline for capabilities of doing highway speeds in the classic truck. The suspension Tito’s father originally installed needed to be upgraded, so Tito added a three-pump CCE setup with four new DieHard batteries. To get the Chevy to lay down low, Tito opted for the two-link rear suspension with the step notch.

Once the father/son team was finished with the assembly, they stood back and admired the truck’s completion. They joked about how the color combo of the truck resembled a raccoon, so it was given the moniker “La Coonster.” Even deeper is the symbolism he draws from the two shades of gray meeting. For him, it represents the relationship he has with his father and how no matter what problem or impasse may arise they will always meet in the middle for the greater good.