Newsletter
Sign Up today for our FREE Newsletter and get the latest articles and news delivered right to your inbox.
Home » 1953 Chevrolet 3100 – Calling Out Names 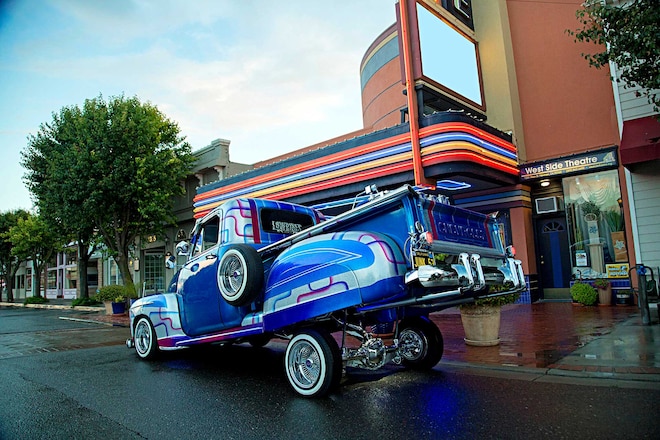 It started off just like any other day when Danny pulled into work in his 1951 pickup. As he got out, he ran across a coworker who mentioned to him that his girlfriend had a truck just like it. Danny asked if she was looking to sell it and a few days later they scheduled a time.

Upon his arrival, Danny saw the truck was in a walnut farm located in Delhi. Her father was the original owner, the truck was in great shape, and they settled for $500, of which he gave half down and she agreed to take the remainder in a few weeks. “It took a week of wrenching to get it started, and from there I drove it straight home,” Danny says.

A year had gone by since he’d picked up the truck and now that the honeymoon phase with this truck was over, Danny changed the front clip, swapped the engine, and installed a suspension setup all in the backyard. During this time, a former club member would poke fun at his unpainted truck by calling it “The Junk.” “His car was all done up and he would tell me not to park my junk next to him,” Danny says. Yet instead of taking offense to the comment he used it to his advantage as a source of motivation and even went as far as giving his truck that very moniker.

As time flew by, Danny was continuously questioned about when he was going to paint the truck, which is when Danny decided to pull a loan out to have his truck painted and get the interior done. He enjoyed that setup for just about a decade when he decided to give the truck a face-lift. With the help of Benji Johnson, they silver-flaked the fenders, roof, running board, and bed cover while adding multi-color tape shade patterns. The 350 was completely redone, the full suspension was chromed, and the new rear end was engraved prior to installation. With the truck finally complete, it had taken the better part of 18 years.

What you see now is the current state of his truck. While most would agree it’s done and complete, Danny still has a few more ideas he’d like to implement before he calls it a wrap.