Newsletter
Sign Up today for our FREE Newsletter and get the latest articles and news delivered right to your inbox.
Home » 1952 Chevy 3100 – Dream On 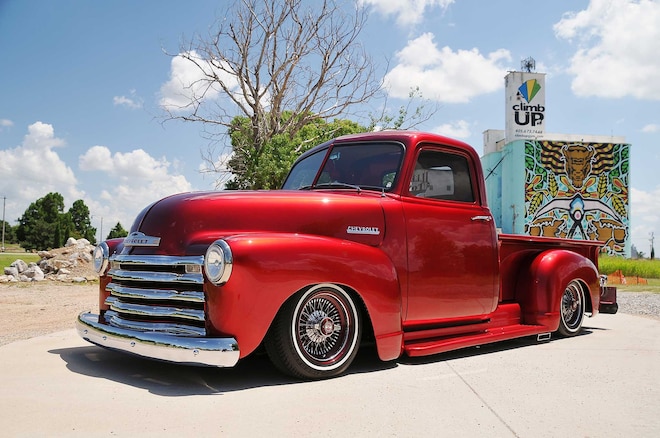 A dream is a succession of images, ideas, emotions, and sensations that usually occur involuntarily in the mind during certain stages of sleep. Dreams can also manifest based on your desires through passions. Ricky Granadoz Sr. of Wellington, Texas, has been living by his dream his entire life. His dream was to own and customize a classic truck and build it to new heights. His dreams came true in 1994 when his wife’s father introduced him to an older gentleman who was selling his 1952 Chevy Pickup. The pickup wasn’t in the best condition but it started and drove. For the low price of $650 Ricky’s dream finally began.

One of the main goals was to unite with his son to build something they could both be proud of; and when the purchase finally became a reality, his son Ricky Jr. was in college for automotive painting and was due to graduate at the top of his class. Ricky’s first step was focusing on the necessities to make the classic road ready. He purchased a Chevy Nova with a blown motor, and he and his son cut down the frame and welded the Nova front frame clip, which added power steering and disc brakes. The next step was changing the rear end by adding the Nova back.

Under the hood, the stock 235 with the 4-speed transmission was swapped when Ricky took a 350 out of a Chevy Suburban that he bought for parts. His friend JD Hamby added Flowmaster exhaust for better air flow. With the motor upgraded, it was now time to work on the exterior and repairing all the rust spots. Ricky and his son repaired and replaced every panel in the Chevy including the cab corners, fenders and floor. Once the pickup was covered in primer from the body work, it was time for Ricky Jr. to impress dad with his new trade.

Four rich coats of House of Kolor Kandy Brandwine was sprayed over four coats of Orion Silver throughout the body replacing the primer red with which it had been purchased. While the Chevy was being reassembled, Ricky and his son replaced all the brake lines and used Painless Wiring to the fuse box for a safer ride. Ricky decided to redo the stock bed by purchasing wood from a hardware store and cut the pieces to fit, prepped it, sanded it and stained it. Clear coat was added for weather proofing and the metal strips were painted by Ricky Jr. and installed with chrome bolts. A special location in the bed was used to access the relocated gas tank underneath the bed.

For the suspension portion, Ricky and his friend Willy Olvera installed the 4-link bars and added a full air ride suspension bringing the classic Chevy to the ground at the touch of a switch. Ricky enlisted David Villarreal from Childress, Texas, to add his flavor to the interior. The seats were custom built as well as the door panels and wrapped with Camel vinyl. The camel colors carpeting was laid down to blend. Ricky Jr. painted the entire dashboard and Brandon McCoy came in to add some pinstripe. A full stereo system was added by Ricky and his son inside custom enclosures behind each seat. For some unique touches, Ricky used a CNC router he had at work to cut .357 revolver shells and custom fit them inside the bed rails with the help of good friend Jeff Powell.

Ricky’s dream began as a child where he dreamt of building a classic truck, but his dream was fulfilled when he and his son finally came together to design something of their own. Ricky wishes to thank his wife Connie and her family for understanding his dream and standing beside him. A special thanks to their children Cecilia and Anna for helping to load and unload the truck at shows, and a huge thank you to Ricky Jr. for excelling in college and adding his immaculate painting touch on the Chevy. Thanks goes to Bob at Owens Salvage for helping to find parts and Julian and the entire Illegal Toys CC family for allowing him to represent the Texas chapter and prove that as long as you keep dreaming you can always succeed in your goals.