Newsletter
Sign Up today for our FREE Newsletter and get the latest articles and news delivered right to your inbox.
Home » 1952 Chevrolet 3100 – Self-Therapy 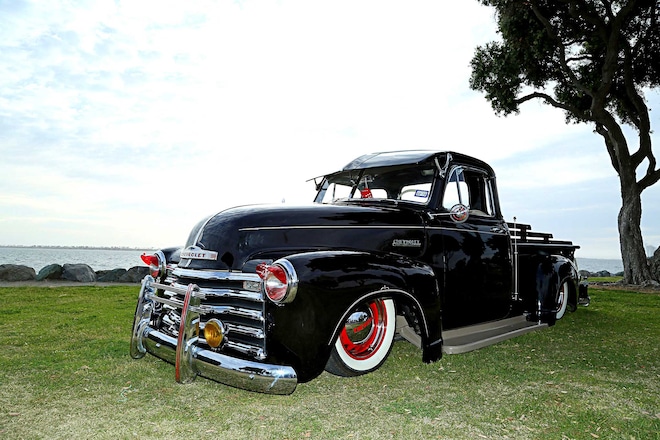 Statistics from the American Institute of Stress (AIS) show that 77 percent of Americans regularly experiences physical symptoms caused by stress, and the number one cause of stress is job-related pressure. It’s bad enough being an employee but when you’re self-employed the pressure is unimaginable. Eddie Palacios knows it all too well. As the owner of a small cabinet shop, he says, “I was going through a tough business period and was stressed with running my business and fighting to stay open.” He would take business home with him, was constantly in a state of anxiousness, and he knew that he needed a hobby to keep his mind preoccupied.

One day, as he was going to his daughter’s softball game, he spotted a 1952 Stepside that was for sale, so he decided to stop by and have a look. The truck wasn’t running, but it was complete and solid, so he worked out a deal and took it back to the shop.

The truck became a form of self-therapy and he began working on it in the evenings. “Everyone would go home and I would stay at the shop and work on the truck,” Eddie says. His newfound hobby kept his mind off of work-related stress and it brought him peace. He also adds, “This truck probably kept me sane through all the unstable times with my business.” Since its completion, his therapy used to involve wrenching and sorting out kinks in the trunk, but that’s long been traded in for quiet, peaceful cruises in the truck that he gave life to, and a truck that gave him life back.

Engine
235 inline-six with an aluminum radiator