Newsletter
Sign Up today for our FREE Newsletter and get the latest articles and news delivered right to your inbox.
Home » 1952 Chevrolet 3100 Pickup – Holy Dirt 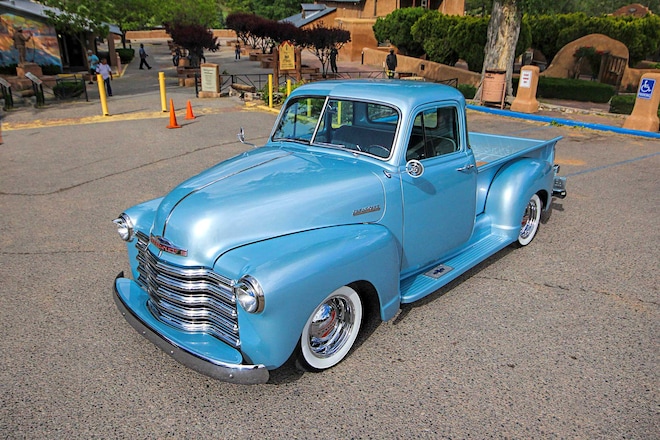 Situated in the foothills of the Sangre De Cristo mountains of New Mexico lies the village of Chimayo. The town, well known for its historical church, El Santuario de Chimayo, is also home to a little well (located just off the side of the church) better known as Pocito. This area is comprised of a pit full of “Holy Dirt” which is believed to have healing powers, and during Holy Week, the village is packed with those making pilgrimage to the church. As an extension of the cultural affair, Good Friday is when locals dust off their rides from winter storage and cruising the streets becomes a celebratory affair, and among the regular attendees is Valerie Chavez.

As a teen, her interest in cars came second nature as she was surrounded by custom cars which were built either by her brother or boyfriend. Looking to build a personal project of her own, Valerie scoured the web looking for the right one and that’s when she came across a classic Chevy truck. It turns out the previous owner had lost interest in the project, so a deal was struck and she took it straight to the streets. Within months, she realized that she didn’t like the “three-on-the-tree” setup. She wanted something more modern, something with all the amenities and that’s when she contracted a local builder to add a subframe, a new 350, and a relocated gas tank. From there it went to Eli Martinez (Extreme Twist Collision) who massaged all the panels and doused it in a light blue paint. After months of waiting, the brilliantly painted truck was hauled back to her garage for the final stretch of the build. Six months later, Valerie found herself with a garage full of parts and little to no help from the person she had hired. She was fed up and started looking around for new help. While attending a car show in Alamosa, Colorado, she ran into an old coworker and his wife. After sitting down with Glenn and Sylvia Wiuff, from View Customs, they agreed to help her finish up her truck and the pair became her saving grace. They stepped in to rewire the truck and installed the new A/C, and after a laundry list of parts was installed and fine-tuned, the truck was running like a dream.

Now that the stress is behind her, the truck is a worthy street machine that gathers its fair share of attention. If you’re ever around town for Good Friday, then be on the lookout for Valerie as she’s become a regular attraction and can often be spotted cruising the streets of Chimayo.