Newsletter
Sign Up today for our FREE Newsletter and get the latest articles and news delivered right to your inbox.
Home » 1952 Chevrolet 3100 Pickup – Driven 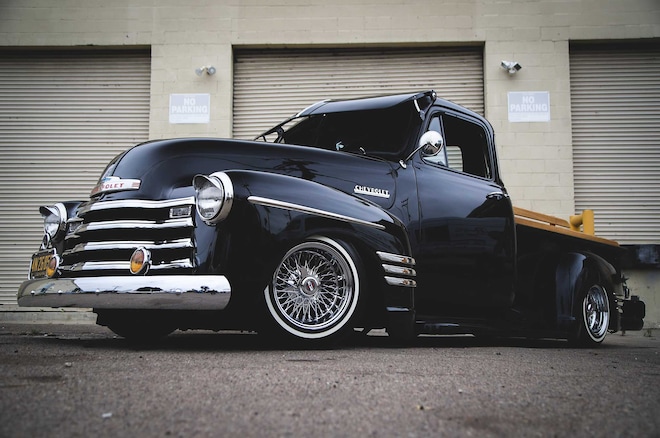 Leonard Roybal knows the streets of the coastal city better than most. As he sits behind the wheel of his customized ’52 Chevy 3100 pickup, Leonard’s mind takes a trip to the days of his youth when he stood alongside his father fixing up lowriders during the cool summer mornings. From dawn to dusk, Leonard focused all of his energy on learning the ins and outs of converting a project car into a smooth and slow-riding lowrider worthy of competing in local car shows.

Leonard’s first lowrider was a ’79 Monte Carlo which his father helped rebuild. After the project was complete, he was hooked for life. He amassed his current collection by flipping project cars, but when he stumbled upon a ’52 Chevy 3100 on Craigslist, he knew it was a keeper. Leonard always dreamed of owning a classic truck, and although he knew it would be a challenging project, it was an opportunity he couldn’t pass up.

Leonard wanted his truck built a specific way, so no detail or expense was spared during the build out. He enlisted his compadre to help restore the interior which strengthened their bond. A friend of Leonard’s took on the task of painting the truck a shiny black. About $25K and three years later, the all-original pickup was completely restored just like it deserved to be. After the struggle of completing the project, Leonard decided to use the truck as a daily driver instead of keeping it stored in his garage. After all, it was meant to show off and turn heads all over San Diego.

He entered almost every car show possible in Southern California and lost count of how many times his pickup truck placed. It was a winner and worth all the blood, sweat and tears Leonard experienced throughout the restoration process. Now that the pickup truck is complete, Leonard spends his time cruising with the Amigos San Diego Car Club and looks forward to hosting the popular Chicano Park Day celebration every year.