Newsletter
Sign Up today for our FREE Newsletter and get the latest articles and news delivered right to your inbox.
Home » 1950 Chevrolet Sedan Delivery – Cruise Night 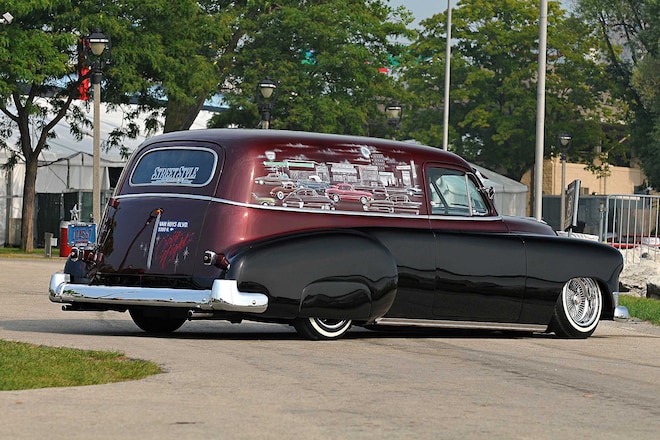 For decades, Wednesday nights on Van Nuys Boulevard was the cruise spot for the Hollywood area while weekends were reserved for Bob’s Big Boy in East Los Angeles. These were the stomping grounds for many; as a young boy Tom Hagenson knows all too well, as he spent plenty of time hitting both spots.

At 17 years old, when he was finally able to afford his first vehicle, he landed a 1950 Chevy Sedan Delivery from a handyman for a mere $150. “It was a funky green color but it was all original,” Tom says. “It was my baby and I was proud to own it.” The body was straight, but only for a few hours, as his brother managed to put a huge dent on the front fender on their first cruise out. Tom was so mad and frustrated that months later he took the Chevy out, blew the motor, and left it on the side of the road where it wound up getting impounded and lost since he wasn’t able to afford the impound bill.

To not be able to fix up that old Chevy the way he had wanted to broke his heart, and even after going through a few more Chevys there was something special about the first one he bought.

Thirty years later, Tom was browsing online ads for vehicles where he found a 1950 Chevy Sedan Delivery vehicle very similar to the one he’d once owned. Eager to relive those younger memories, he contacted the owner and he was told that the car had been in their family for the past 30 years. The sedan was passed from brother to brother until they just didn’t want it anymore. In passing, the owner mentioned that it was originally purchased from an impound lot-to that both Tom and his wife, Melinda, joked it might be the same one.

It seemed far-fetched that this could have been the same truck he was once owned but it didn’t matter to Tom. He purchased the truck, and after relocating to Chippewa Falls, Wisconsin, he spent the season driving it as much as he could.

When the first winter came, Tom decided it was time to do some work, so he started taking it down. With the bottom half stripped to bare metal, it revealed that the fender had been repaired exactly where his brother had previously left that huge dent. As luck would have it, he was in possession of the very first car he purchased and that’s when the sentimental feelings all came back knowing that he was going to have a second chance with his original dream car. Aside from the bodywork and paint, the engine was updated and made more reliable and appealing to the eyes, while the 10-year-old hydraulic system was updated to newer and better-performing parts.

The most personal aspect of the classic Chevy was the paint. Tom searched everywhere for a painter who could handle his creative vision. He enlisted Ray Nelson, aka “Sprocket”-a name given to him after he lost fingertips in a sprocket. For the theme, Sprocket brought to life a visual that depicts Tom’s life in Los Angeles; one side of the car depicts a visual of the scene at Bob’s Big Boy while the other scene is of Van Nuys Boulevard. On the Van Nuys side, Tom wanted two silhouettes of himself in his Sedan Delivery going one way and his wife going the opposite way in a separate vehicle. Sprocket also added freehand pinstripe work for even more detail while all the chrome was refinished and brought back to life.

As any old-time lowrider enthusiast knows, you need to have some good Motown playing in your ride. Tom had a guy in Eau Claire at Elite Audio transform the non-working stereo into something that made him proud to set the volume up high during his cruising through the Wisconsin streets.

Tom admits that when he gets in the Delivery it brings him right back to his childhood cruising those Hollywood streets in the lowrider. He wishes to thank his patient and loving wife, Melinda, for all her help and support throughout the years and his Street Style family for all their motivation. In a once-in-a-lifetime stroke of luck, his car at 17 is his car for life now and Tom is proud to be able to replicate his Cruise Nights.