Newsletter
Sign Up today for our FREE Newsletter and get the latest articles and news delivered right to your inbox.
Home » 1949 Chevrolet 3100 – Childhood Inspiration 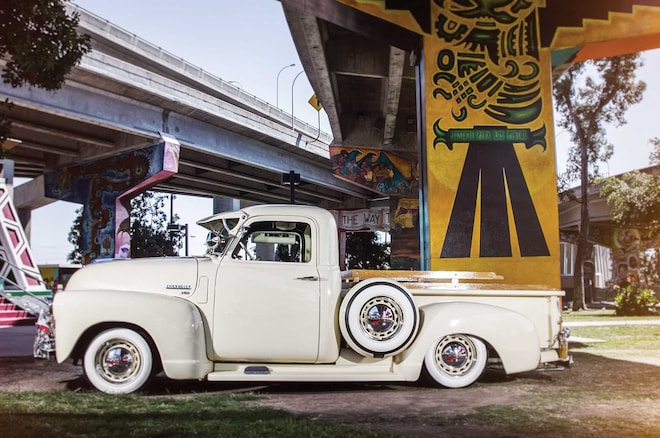 Inspiration for our projects comes in all shapes and forms. For some, it is about making a dream come true, while others simply want to make a statement. For Ruben Ramirez of San Diego, California, it was life’s unfortunate circumstances that led him to create this ’49 Chevy 3100 masterpiece. With the recent death of his mother, Maria, and his son Ruben “Little Ruben” Alberto Ramirez serving in the Marines, Ruben found himself reflecting as he went through old family albums. It was there that he came across a picture of a Chevy pickup he would drive around in with his father when he was just a little boy. So for Ruben, a much-needed distraction would take the shape of a complete frame-off restoration by transforming a recently purchased ’49 Chevy pickup into one resembling that of his childhood days.

No time was wasted. Immediately after purchasing the pickup for a mere $3,500, it was off to longtime friend, Frank Saurez, who would rebuild the original straight-six inline 216, as well as adding numerous chrome accessories along with a three-speed floor transmission and custom dual exhaust. From there, Marlo’s, in National City, applied a two-stage Cream PPG color mixture mimicking the truck’s original factory color. At Pacific Upholstery in San Diego, Oscar would install a Brown Sandstone suede leather interior covering the original bench seat. While Luie, at Car Connection in San Diego was installing a custom airbag suspension, Ruben and Little Ruben (who was now on leave from his military service) began adding the finishing touches to the project. They bolted on the original artilleries, which were painted and detailed with accenting pinstriping, and then mounted onto Firestone 5-60 whitewall tires. The last thing to complete was the bed’s custom woodgrain-finished floor, which this father and son team decided to take on themselves. In doing so, they created their own memories just like the ones Ruben had with his father so many years ago.

Dreams seldom become realities by themselves, and according to Ruben this one had a lot of people who helped out. “Special thanks to Jesse Garcia, Frank Suarez, Luie, Oscar, and everyone else who lent a hand … like fellow Oldies Car Club members. Also to my grandson, Emilio, your trokita is waiting for you.”

Upholstery
Oscar at Pacific Upholstery in San Diego would install the suede brown leather interior to the original bench seat.