Newsletter
Sign Up today for our FREE Newsletter and get the latest articles and news delivered right to your inbox.
Home » 1949 Chevrolet 3100 – Brotherly Love 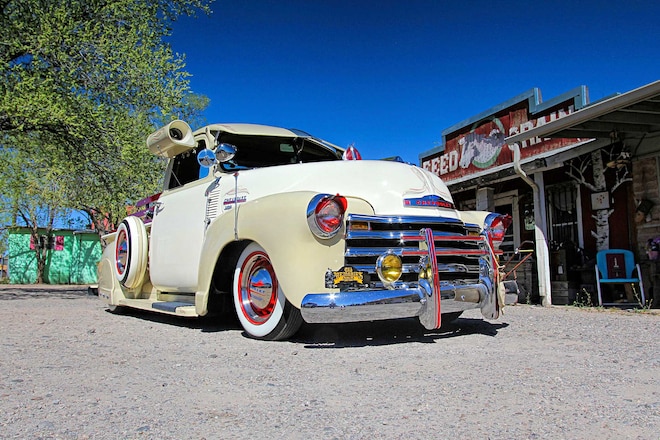 Brothers may share a special bond but twins share an emotional connection that only few could understand. Among the fortunate few to understand that concept would be the Perez brothers. The truck you see here is owned by Angel Perez, the youngest of the Perez twins by 3 minutes. Along with his brother, Javier, they were both avid car enthusiasts; this truck is a collaborative effort between the two.

Looking back, it was in 2003 when the brothers had grown apart when Angel stepped away from the car scene. By 2014, Angel received word that his brother was ill so when they reconnected a pact was made that they would both build a new ride together. To start the process, Angel began searching for a truck and spotted a clean 1949 Chevy truck. Once they hauled the truck back home from Texas the brothers tore the truck down to the bare frame and cab, working a couple of days a week side by side, just like the good old days. Underhood, the ailing 216 was scrapped for a freshly rebuilt 235 and in the process they threw in an airbag setup while cleaning up the full chassis.

After the truck was mechanically dialed in it was shipped off to Hathaway’s Hot Rods to get it straight for the new caramel and cream two-tone paintjob. After a final buff and polish, a set of 15-inch Artillery wheels was massaged onto Coker tires, and from there the interior was freshened up with new upholstery and a custom woodgrain dash, which is when Joey Demny stepped in with his pinstriping brush, adding lines all throughout the truck.

Tragically it was not long after the truck was completed that Javier died. It was a traumatizing moment that left a void in everyone’s heart, but his spirit lives on through this truck and Angel is grateful to have spent time reconnecting with his brother and indulging in a passion they both shared.

Engine
235 cc with a split manifold