Newsletter
Sign Up today for our FREE Newsletter and get the latest articles and news delivered right to your inbox.
Home » 1948 Chevrolet Sedan Delivery – La Azteca 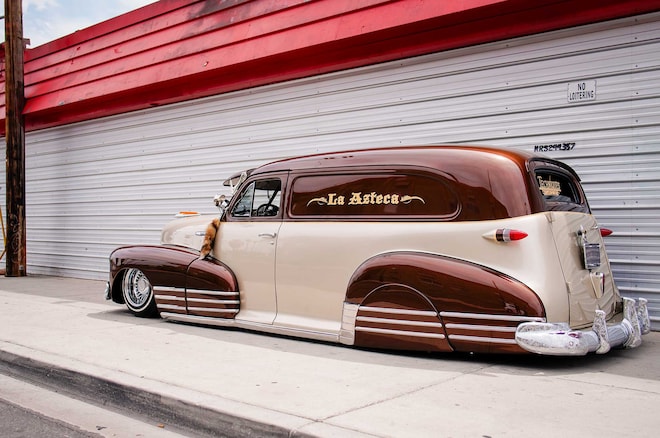 The story of creation, according to the Aztecs, is actually a story about birth, death, and rebirth. When the world is destroyed, it’s born again through sacrifice…and only through sacrifice, the Aztecs legend says, was the sun able to be created. When broken down and analyzed, the Aztec story of creation could serve as an almost parallel metaphor for how most lowrider builds come about. Such is the case for Juanita Salazar.

As the daughter and sister of dedicated lowrider men, Juanita has dreamed of building a lowrider since she was 3 years old. At 16 (and after begging consistently), her father, Joe Salazar, Sr. surprised her with the purchase of a 1977 Cutlass Supreme. After investing what little a 16-year-old could afford to fix it up, it was stolen and found stripped bare. Juanita slowly began to rebuild the Cutlass only to have it stolen again. After some time, she purchased a ’76 Cutlass and began customizing that car. Devastatingly, that car was also stolen. After so much loss, Juanita decided to instead focus on building a family and put her lowrider dreams on hold. She gave all of her Lowrider Magazines to her little brother, Joe Salazar (who eventually became the president of Techniques Denver Chapter), but continued to attend lowrider shows as a spectator.

After her boys grew up, she felt called, once again, to build a lowrider of her own. She purchased a 1948 Chevy Sedan Delivery that was, at the time, painted black with blue-green flake. It needed work but it was the new beginning she needed. Shortly after moving to Las Vegas, the Delivery was damaged after backing into a parked truck. Juanita realized that her own “Aztec” creation story was unfolding, and that her constant cycle in the “life” and “death” of her lowriders would end here.

Juanita called upon the Vivar Brothers to do all the bodywork for her ’48, taking it down to the bare metal, with the shell stripped to ensure a straight body. The damaged rear quarter was replaced with the help of her Techniques C.C. brother, Ruben Quinones. Juanita opted for an old school two-tone paint scheme, using Lexus Sunset Bronze and Cashmere Satin. She then had the bumper wraps and bumper guards engraved. Gary Jensen contributed with some gold leafing, making this creation almost complete.

After discussing airbag options with her brother, Joe, she decided the car would sit on it’s frame. Juanita purchased the air ride kit from Jimenez Brothers Customs and all fabrication was done by Joe and Robert Rodriguez. The extensive modification included shortening the rear end, as well as fabricating the transmission, floor gear shifter, and motor mounts. The firewall and taillights were shaved down, painted and pinstriped by Tate Hurt, while the electrical wiring and sound system was completed by Carlos “Shorty” Guzman.

During the rebuild, Juanita experienced another huge shift in her personal life, but managed to use her ’48 as a focal point during her toughest times. The cycle of birth, death, and then rebirth would resonate in Juanita Saslazar’s life multiple times until “La Azteca” would be completed. She finally had the lowrider of her dreams, on her terms and in spite of all the loss she had experienced. With her rebirth completed, La Azteca, her “warrior princess,” rides strong and bold, just like Juanita.