Newsletter
Sign Up today for our FREE Newsletter and get the latest articles and news delivered right to your inbox.
Home » 1936 Ford Truck – Trokita Loca 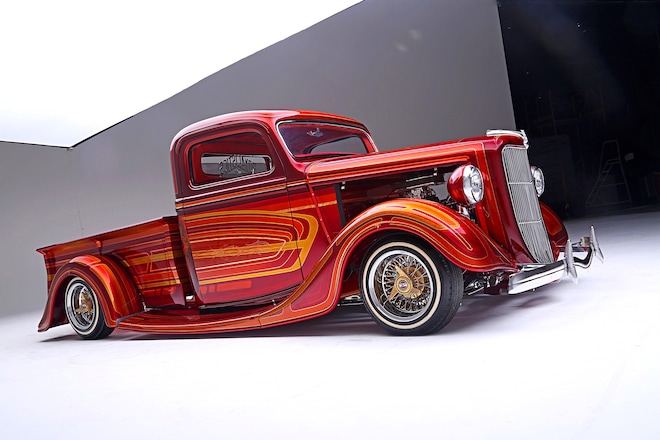 For the Sierra family of Porterville, California, their dedication to lowriding is unquestionable. With three generations of family members lowriding, and a fourth generation that’ll hopefully keep the family tradition going, the Sierra’s history in lowriding is one that can be traced back to the ’60s.

Just ask the eldest, Sal Sierra II, and he’ll tell you a fascinating story about how he originally purchased this 1936 Ford truck in the ’70s. At the time, the truck was all original and propped up on a set of Cragars and 520s. According to his son, Sal III, “My dad brought it home and told me that we would fix it up together.” With slight modifications, the pair wasted no time taking it throughout California. From strip to show, the truck served its purpose, but in the early ’90s the duo decided to rebuild it from the ground up, and the 1936 was transformed from a street ride to a full-blown show car.

In 1992 the truck was entered into a competition where it fell short of winning the Truck of the Year award. In the years to come they’d now find stiff (and slightly unfair) competition from the mini-truck scene. “At the time, mini-trucks were being heavily modified in ways you couldn’t do to bomb trucks,” Sal III explains. Due to those conditions, it was in 1993 that a new sweepstake was created to accommodate a new category called “Bomb Truck of the Year.” With high hopes, the Sierra family decided to get more work done to the truck, but while it was being transported to a shop the unthinkable occurred. The trailer it was on came off the hitch and it smashed into an olive tree with the truck still on it. Trokita Loca was totaled and with no insurance the fight for the sweepstake title would have to wait.

With the truck in shambles, the family thought long and hard about what the truck has been through and what it represents. Trokita had already been through four different transformations, but it was this final makeover that kicked it off.

In its new state, the truck’s engine bay was fitted with a 350 Chevy that was assembled by Charles Celeya. Featuring engraving by Tiger, the motor was impressive, to say the least, but the true tale of the truck is found in the body modifications and intricate paint scheme found throughout.

Heavily modified by Jaime, the body mods include a 3-inch chop top, molded tailgate, suicide doors, widened bed, tilting front end, shaved firewall, and frenched-in Cadillac taillights, just to mention a few. As for paint, it started off with a base color of Axalta Hot Raspberry Candy. Stone Color Studio was then contracted to add multiple patterns in old-school over-under fingerprints and tape shades in honey gold, molten orange, and hot apple throughout. Pinstriping and leafing came by way of Jake Blancas, while Alberto Herrera added Mexican Revolucion airbrushing on the hood, center console, and bed of the truck. Final touches came in the form of a four-pump setup installed by Abel Rodriguez while Audio Connection dropped in the sounds and Little Rich’s Custom stitched the orange and red suede interior. The final touch was when they hammered on a set of 72-spoke Zeniths wrapped in 520s.

Just recently, the truck was displayed at the 2016 SEMA Show where it won the “Eastwood Best Paint” award.” Following SEMA the truck was shipped off to the Las Vegas Super Show where the truck was a heavy weight contender for the seemingly elusive “Truck of the Year” award but came up short, taking Second Place.

In all, the 25-year journey to capture the crown title has been met with what some would call disappointment but not for the Sierra family. “We travel as a family to shows and always have fun no matter what happens, but we will continue to keep adding to the truck until we get our ultimate goal of one day winning the title,” Sal tells LRM.

It’s been an epic journey in which the memories created are irreplaceable but it’s a family goal that they’re not in a rush to achieve. Yet even after hearing his story, we at Lowrider can’t help but wish the Sierra Family the best of luck. Their respect for lowriding and good sportsmanship is proof that the journey is more powerful than the prize, and we wish them the best of luck.