Newsletter
Sign Up today for our FREE Newsletter and get the latest articles and news delivered right to your inbox.
Home » This 1948 Chevrolet Suburban was a Trade Up 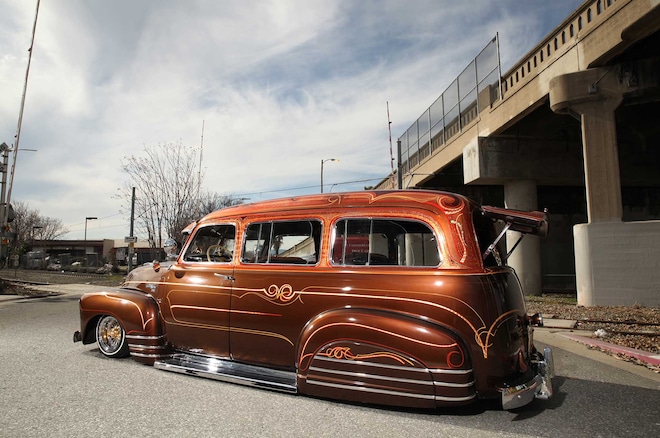 Lorenzo Angel Garcia was raised in San Jose, California. His mom gave him a 1972 Chevy Caprice when he was 8 years old, yes 8! “I couldn’t do anything with it at the time, it mostly just sat there until I got older,” Lorenzo explains. “I got rid of it when I was in high school.” Lorenzo had traded his Caprice for a running 1968 Cutlass. This would be his first trade of many more to come. “I’ve had about 45 cars. Whenever I get tired of the car, I go out and start looking for trades. I began with a ’70s car and I’ve worked my way down to the ’40s. I could have been in the ’30s by now but my dream car is 1941-47 convertible.”

He was able to pick up this Suburban by trading a fully patterned 1947 Fleetline Fastback he had. “The Fleetline was in great condition but I feel like my chances of getting a convertible are greater with the Suburban.”

The Suburban already had the root beer brown paint and candy tangerine top. “It was pretty clean but I knew what it could look like by adding my style to it.” He began by adding triple gold Zenith and a hydraulic setup. Lorenzo then had fellow club member Pete help him out by adding patterns and ‘flake to the Suburban. Pete used candy tangerines and candy pagan gold to add multiple tape shades and patterns to the top. “I was speechless with the work Pete did in four days but I still felt I had to take it to one more person to add the final icing on the cake.” That man was Carlos Lima, San Jose’s legendary painter from the ’70s. With full creative freedom to do what he wanted, Carlos pulled out his brushes and laid out yellow and red fine lines thought the entire body as well as gold leafing.

During our shoot, Lorenzo was in the middle of a deal to trade this Suburban for an all-original 1947 convertible. If he does get it, he plans on having it fully patterned, juiced, and on Zeniths. We wish him luck on the deal and can’t wait to see his vision on it.