Newsletter
Sign Up today for our FREE Newsletter and get the latest articles and news delivered right to your inbox.
Home » 1954 Chevrolet Stepside 3100 & Suburban – Stepside And The Sub 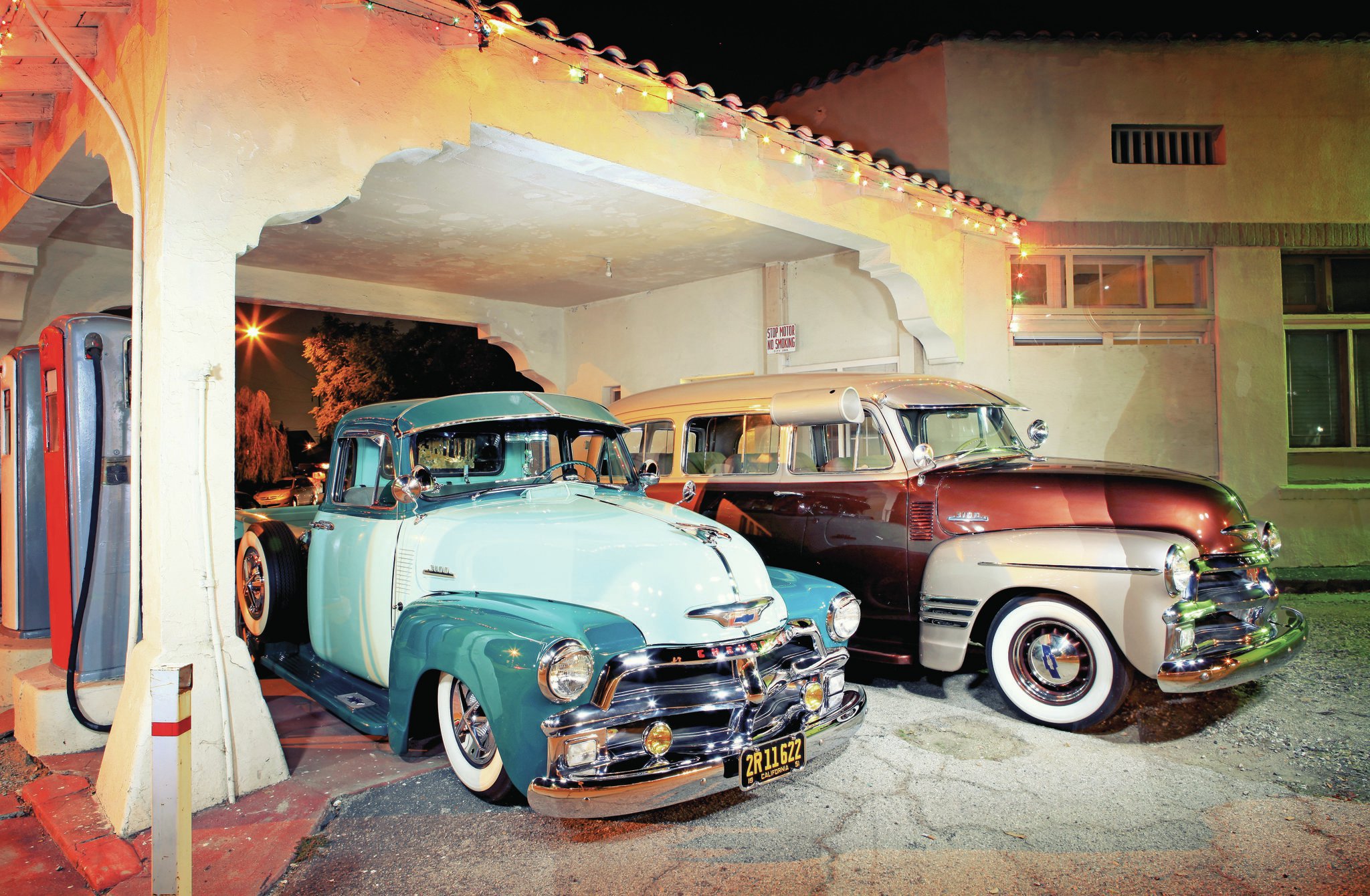 At the age of 8, George Vallin’s father showed him how to drive a car and it was around that same time he took an active role in his father’s passion for cars. “My dad used to buy, restore, and sell cars,” says George. “Ever since he could afford a car, he’s had custom cars and I remember at one point he had a total of nine cars that ranged from Impalas to Porsches.” Through those experiences he too has become an avid builder of cars and now he and his brother-in-law Rick Betancourt have two trucks that hold their weight in looks and originality.

George originally bought the green truck while on a road trip back from Mexicali. “I was driving by different farms on my way back and a guy in the town of Westmorland, California, had a yard sale. In the back of the house he had a truck, but it was very incomplete. So I went three houses down and stumbled upon a ’54 Chevy.” The engine was shot and the truck hadn’t moved in a long time. When he asked the owner if he would sell it, he said that he would never get rid of it. Long story short, he threw a number at the owner and minutes later he found himself with a new project.

Months later when he was out cruising in the truck, he ran into a friend at a liquor store. His friend also had a classic truck and asked George if he was going to build anything else. George told him that he was looking for a ’54 Suburban. It just so happened that the guy knew where there was one. “He told me that there was one down the street, but that it would have to be a different day since he didn’t have time.” That didn’t work for George, so he told his friend that he wanted to go and his friend complied. They went down a few blocks to where the Suburban was. “The guy selling it told me that it didn’t have a motor or tranny, but that he wanted $800 for it. I didn’t even give him a chance to pull it out of the garage before I had AAA there ready to take it to my house.”

Fast-forward a few decades later and George was short on money for his stepdaughter’s quincenera, so he decided to sell the truck to get the money for it. “The only reason that I sold it was because she really wanted to have a quincenera. If it wasn’t for that, I would still had it,” explained George. “And today, she doesn’t even talk to me.” Now George’s son Dylan stands to inherit this fine Suburban.

Rick Betancourt’s father ended up buying that ’54 truck. The truck was already in great condition, but nonetheless he decided to add more to it such as air ride suspension, Mustang frontend, and a few other features. His father always had cars and when he was ready for something new, he gave the truck to Rick. He would like to thank his parents Ray Castillo and Elizabeth Castillo for blessing him with the truck. George would like to thank God first, his parents for never letting him down, his family and his friend that helped him find the truck.

Engine: 265 V-8 with glasspacks and a Champion battery

Sound System: A restored record player was added along with a JVC CD player and two Pioneer 6×9-inch speakers powered by an Alpine amp

Engine: B&B in Covina, CA, installed the 292 straight-six out of a 1965 Chevy with a Yellow Top Optima battery, Mattson radiator and fan

Body/Paint: Noah Durans in Azusa, CA, two-toned it with a root beer brown and a champagne