Newsletter
Sign Up today for our FREE Newsletter and get the latest articles and news delivered right to your inbox.
Home » 2007 Chevrolet Tahoe – The Transplant 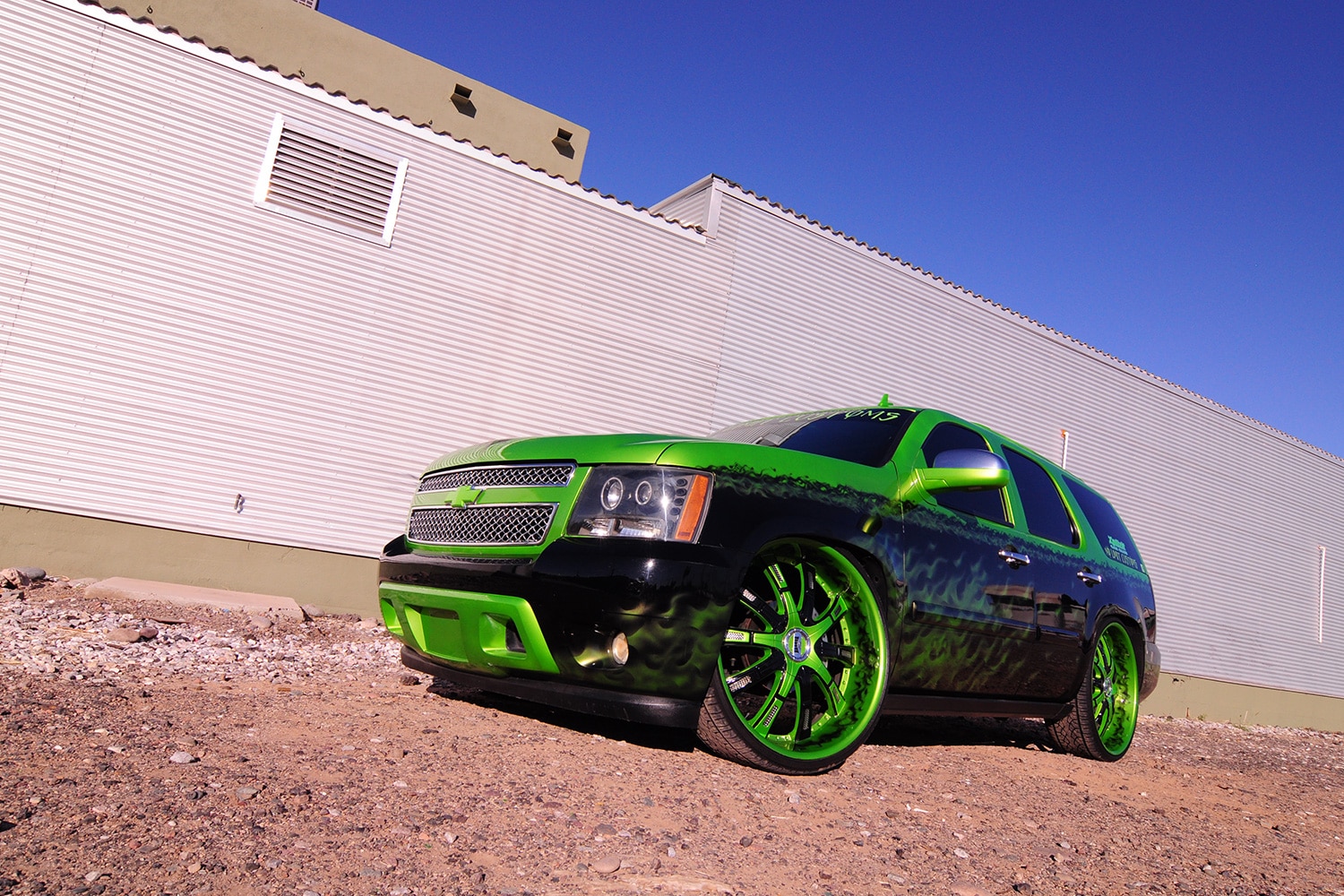 Who says money can’t buy you happiness? Just ask Danny Villatoro, a South Central Los Angeles native who decided to turn Phoenix, Arizona, on its head with the help of his custom ’07 Chevy Tahoe. A proud member of the Explizit car club, the owner of No Limit Customz is no rookie when it comes to customizing his cars. Now in its twelfth year, No Limit Customz is showing Phoenix how it’s done and breaking some necks in the process.

Danny purchased the Tahoe straight off the showroom floor in 2007 and a year later decided to customize his SUV in an effort to represent his shop and their abilities. From the start, he set out to add some eye candy to the Tahoe to mirror the black and green color scheme of his shop. Since the body was already black from the factory, a bright green roof was added for contrast. Feeling the need to kick the paint game up a notch, he turned the reins over to Chavo, who airbrushed Benjamin Franklin on the hood along with the flame graphics on the sides.

In an effort to give the paint a bit more detail, Chavo also airbrushed a series of hundred dollar bills all around the Tahoe and continued them onto the custom rims—because who doesn’t love a Tahoe covered in money? Danny took on the task of adding the Lambo door kit himself on all four doors. When they’re open you might actually believe this beast can fly. To finish off the build, Danny took the project over to Tino, of Tino’s Customs in Glendale, Arizona, to eliminate the stock interior and instead wrap the seats in black and green leather. Tino also built the custom fiberglass enclosure that sits firmly behind the third row seat. The enclosure houses two 12-inch Rockford Fosgates and acts as a platform to a 21-inch flat screen. In total, the Tahoe sports 12 TVs placed symmetrically throughout the interior doors, headrests and even in the sun visors. The electronics are controlled by a Pioneer double din head unit and the tunes get extra help by two Rockford Fosgate amps, totaling up to 1,600 watts—all installed by Danny himself. The SUV was then shipped to his good friend Rick at LA Kustomz out of Los Angeles, California, to install the airbag set up that includes four compressors, three air tanks and ten switches. Completing the Roll Playerz look is a set of 28-inch rims wrapped in Lexani rubber.

Danny has since been hitting the show circuit in Arizona and California on a regular basis all while representing his club Explizit. He’s been making a habit out of turning heads and collecting trophies in his wake. Danny mentioned to us that he has another project in the works and we can’t wait to see what he comes out with next!