Newsletter
Sign Up today for our FREE Newsletter and get the latest articles and news delivered right to your inbox.
Home » 1953 Chevrolet 3100 Pickup Truck – Grounded 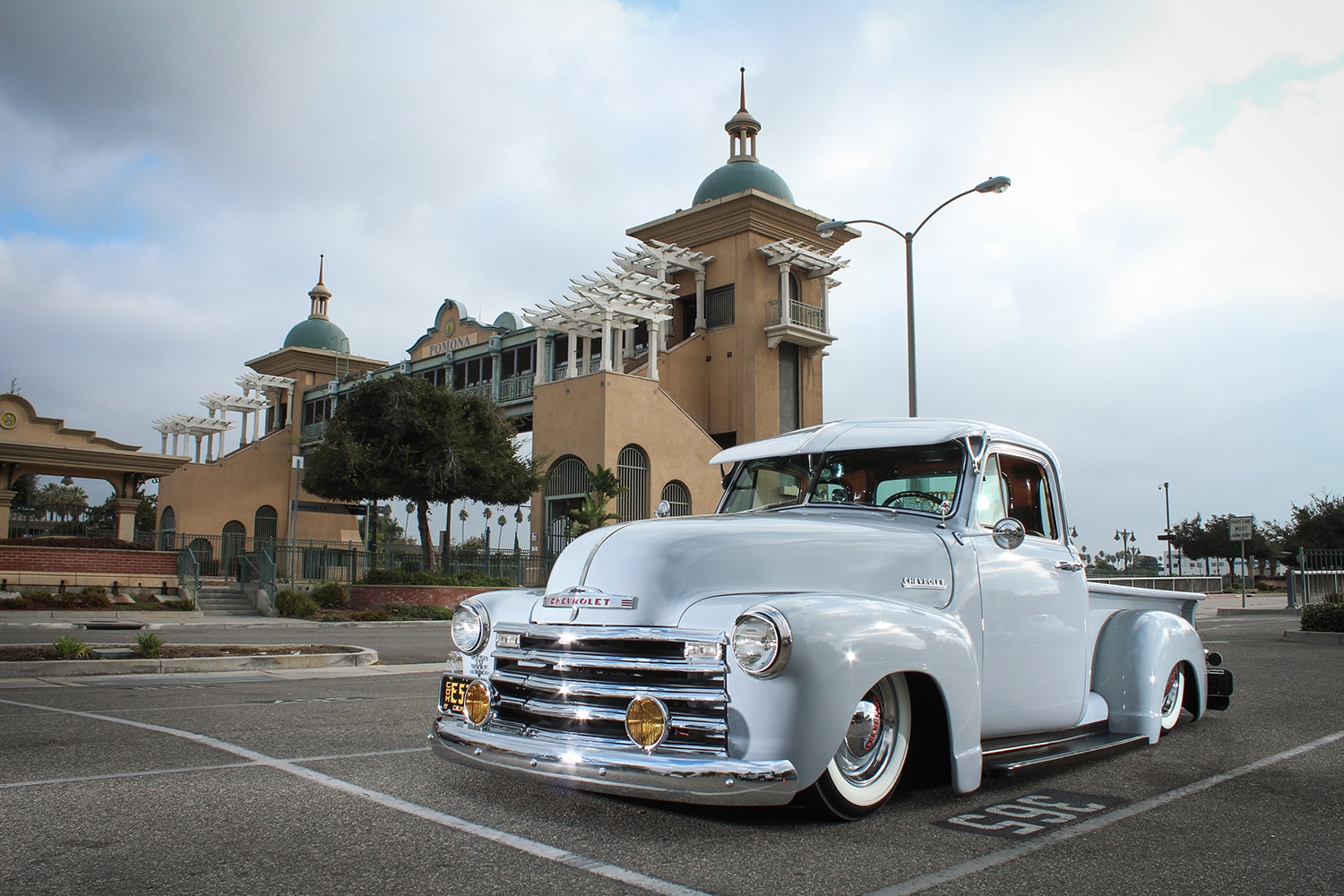 Approximately 45 years ago in the city of Los Angeles, California, George Tamayo, Sr. was born; a soon-to-be lowriding enthusiast. A few years after his birth in 1971, George’s parents moved the family out of the William Mead “Dog Town” housing projects in an effort to prevent George and his brothers from joining the local gang. About 15 miles away, they found a new beginning in the city of El Monte, California. It was there that George’s father worked for Carnation Ice Cream and did side work as an auto body mechanic. In 1974, his father opened up his own shop in El Monte called Custom Unique Body Shop. It was this shop that gave George his full introduction to cars, especially the custom cars he saw that were cruising around Whittier Boulevard, Legg Lake, and Elysian Park. George may have only been a kid, but even then, he knew he would be hooked on cars forever!

In 1982, George purchased his first car, a ’60 VW bug. He worked on this car for three years and when he was finished with it; his efforts landed him a cover and centerfold feature in the February 1985 issue of VW Trends Magazine. Not a bad start for a sixteen-year-old! George says he and his dad did all of the work, too, so it was definitely a father-and-son project that he will always cherish. In addition to his first custom ride, George humbly says he learned the fundamentals of auto bodywork thanks to his father.

Today, George can proudly say he has gone on to own many custom cars in a variety of genres; such as a custom Porsche 930, a Saleen, a monster truck, and a ’50 chop top Mercury.

George’s latest project is of the Lowrider style that he fell in love with as a kid; he has come full circle with this clean ’53 Chevy 3100 truck. Slammed to the ground when it sits, this vintage Chevy is appropriately named “Grounded.” He purchased the truck about four years ago from a shady character; thus explaining why the truck began to literally fall apart during the first month of ownership. The engine was shot, the brakes were bad, and it had many electrical problems. One time, George states, he pulled into his garage, stopped, and the front bumper just suddenly fell off! It was then that he knew that he just had to tear the entire truck down and restore it from the ground up.

George painted the rear bed, fenders and running boards. He later installed the visor with the help of his teenage son, Gabriel. George purchased new tires, rims, hood, bed, and other miscellaneous parts, while new upholstery and a new suspension also followed, to round out the makeover.

George is currently an active club member of Gangs To Grace car club; a club that uses their vehicles as an outreach tool to the lowriding community in order to have a closer and more personal relationship with God. The club members attend many local car shows and offer prayers to those in need, or just lend an ear to those that need listening too.

George would like to give thanks to his son, Gabriel, who helped him a lot with the build of Grounded. He also thanks his dad, Pedro Tamayo, who taught him everything about the auto body industry. George would also like to send big thanks to Steve for helping him with the bed of the truck, and send gratitude to Art Lopez, for his help on the paint process. George gives special thanks to his fellow club members for all of their support and, last but not least, he sends thanks to the good Lord, Jesus Christ.

Body/Paint: George took the bodywork and paintjob into his own hands, laying down a custom mix of PPG dove grey. El Monte Plating in El Monte, CA, did all of the chrome plating.

Interior: Hector’s Auto Upholstery in the city of El Monte, CA, was put in charge of restoring the bench seat and other interior needs.

Sound System: Focal tweeters, mid-range, and woofer speakers are controlled by the Alpine head unit and powered by the Avionixx amplifiers.

Setup: Hoppo’s Hydraulics in Ontario, CA, installed a custom Viair airbag setup consisting of slam bags for the Mustang II front end and the C-notched rear end. Disk brakes up front and a rack-and-pinion suspension were also upgraded from the stock suspension.