Newsletter
Sign Up today for our FREE Newsletter and get the latest articles and news delivered right to your inbox.
Home » Slammed & Chromed 2006 Harley Davidson Softail Deluxe Masterpiece 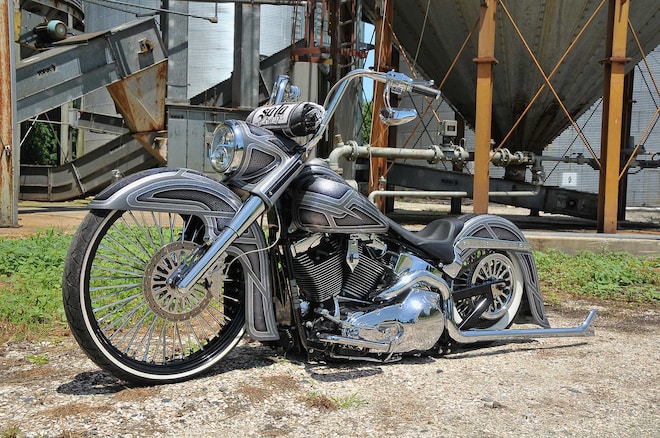 A Harley is a beautiful thing, but a lowrider-inspired version, like this 2006 Harley Davidson Softail Deluxe, is even better. Just ask Mike Hill, a Hughesville, Maryland resident and proud owner of this feature bike. As a youngster, Mike was fascinated with cars and he remembers working a landscaping job to build a Cutlass Supreme, but those days were short-lived once life’s responsibilities came into play.

Knowing he needed more money to upgrade his life and hobbies, Mike started his own limousine company that happened to be right next to a Harley Davidson dealership. Day in and day out, he’d see bikes coming and going, but one day something rather odd happened. While standing outside his shop, Mike recognized a friend pulling into the Harley lot with his bike. He walked over to say hello and found out that his friend was there to trade in his 2006 Harley Davidson Softail Deluxe for something newer. After some careful consideration, Mike offered his friend $7,000, and the Harley was his without even a test ride.

Intent on giving the motorcycle a makeover, Mike ordered a 26-inch DNA Fat Spoke wheel as well as the HHI neck. But soon after putting it together, he was unhappy with the wheel gap, so he modified the neck to sit lower, and then had Joe over at Backbone Built design a custom rear swingarm. The final touch for the suspension came by way of air-controlled Shotgun Shox, which bring this Harley to a pavement scraping stance.

Needing a new paint motif, Mike entrusted the color change to Kyle Morley (Xecution Style). It was there that Kyle applied several coats of PPG silvers and blacks mixed with heavy metal flake. Once the Harley was back home, Mike assembled the bike and added a Roland Sands nostalgic air cleaner and a 39-inch fishtail exhaust from After Six. Once finished, a custom-wrapped seat from Danny Gray was installed while a custom box for the computer tray was made 1″ thinner to give ample tire clearance.

Once the bike was complete, Mike took off on his maiden voyage, and get this; it’s the bike he learned to ride on. Mike wishes to thank Danny Gray, Kyle Morley, Arlen Ness, his nephew Justin Wearmouth, Richard Smitty Smith, Scott Bitzer, Benji Berry as well as Alloy Art, American Suspension, HHI, Dirty Bird, Klockwerks, Shotgun Shox, Backbone Built Bikes, Viair, Dakota Digital and DNA for all their help. Mike chose to breakthrough in the Harley scene in a big way and certainly made a name for himself with the Harley he now calls, “Solo Cholo.”