Newsletter
Sign Up today for our FREE Newsletter and get the latest articles and news delivered right to your inbox.
Home » THE GIFT: A One-off, Custom Engraved, 2006 Harley Davidson Road King 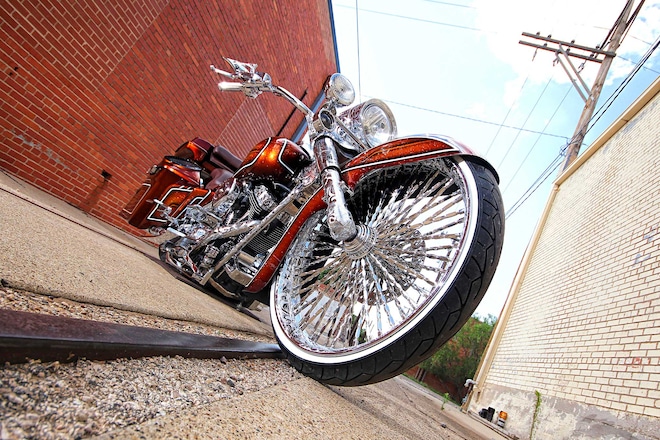 This 2006 Harley Davidson Road King is the creation of Robert Trevino—a swimming pool contractor by trade, but when he’s not designing and building custom pools, he’s infatuated with motorcycles. So, when it came time to build his own, it’s very evident that he went all-in and dove into the deep end.

As important as the process is, the real story here is how it all began, and that’s where his wife stepped into play. Recognizing his love for Harleys, she surprised him a couple of years ago by gifting him an ’06 Road King. Having owned plenty of motorcycles throughout the years, he wanted to make this one really special, and started off slow. He began by adding 23-inch wheels, extended bags and a custom Kandy Tangerine paint job. His efforts landed him a 2nd place in Odessa in 2014, but at that point he wanted to step up his game, so he contacted Power House Custom Cycles in Houston, Texas, to do just that.

Starting with the frame, the neck was raked 47-degrees while a custom gusseted swing arm was added. From there, parts were sent out to be chrome plated or engraved and included in that list were the headlight bezels, swing arms, forks and wheels just to mention a few. With the parts back, all new sheet metal was fitted along with a set of Powerhouse bags, which are 7-inches lower and 14-inches longer than stock. Prior to sending the parts off to point, they mocked up a complete audio set up using 8-inch Hertz speakers and a 13.5-inch JL Audio Subwoofer mounted in a custom fiberglass enclosure.

After a final test fit, the parts were disassembled and handed over to Erik Contreras who sprayed down the custom colors. Once the final coats of clear were applied, dried and cut, the rest of the Kandy Root Beer and Pagan gold parts were mounted back to the bike. All this was done just in time to fly the bike over to Albuquerque to make its debut at the Lowrider Super Show where he took first in his class.

Content but still conscious about his vision, the bike may be done but Erik still has a few tricks up his sleeve, as does his wife who enjoyed the process so much that she’s already building a custom bike of her own. We’ll keep you posted because this is going to be a dynamic duo worth revisiting.

Acknowledgements
I would like to thank Precision Engraving, Ezekiel “Eazy” Garcia from Irving Texas, Chrome triple Plating and Engraving, Power House Custom Cycles- Erik Contreras and his crew and last but not least my Wife, Kids and Family.