Newsletter
Sign Up today for our FREE Newsletter and get the latest articles and news delivered right to your inbox.
Home » Lowrider Style 2002 Harley Davidson Road King With A Twist 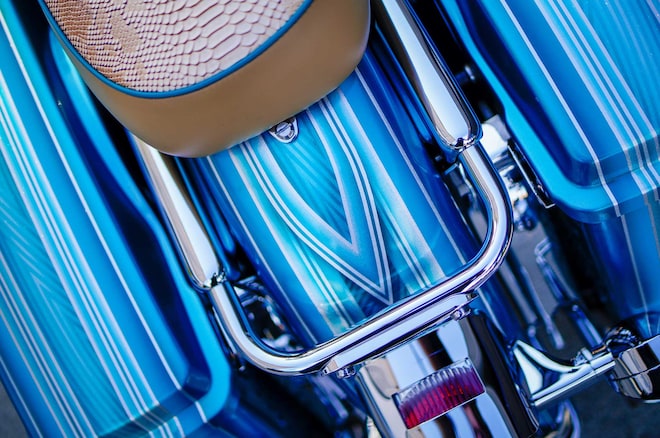 Nokturnal Car Club is known for their radical rides, but up until Richard Celedon of Montebello, California came into play, they certainly weren’t known for builds like this 2002 Harley Davidson Road King. Richard not only changed the landscape of Nokturnal Car Club but became the first member to introduce motorcycles to their fleet of customized cars. It started with his 2005 Suzuki street bike, and a few years later, he added to the roster “La Chona,”’ this fully customized 2002 Harley Davidson Road King. Richard named the gleaming candy teal bike after Los Tucanes De Tijuana’s iconic hit about a girl that spends her time out and about on the town, night after night.

Since then, his family has grown and he now has a supportive girlfriend and a 6-month old baby. But that doesn’t stop him from attending shows or taking a quick ride. Most recently, Richard was invited to display ‘La Chona’ at the L.A. Auto Show, and it was there that Richard took a picture of his father standing proudly beside his Harley. “That was one of the best moments I’ve had with my dad,” says Richard. After all, he was Richard’s biggest supporter and role model. His dad was the one who inspired him to customize cars and bikes, and he still has many fond memories of helping his dad out wrenching on Camaro’s and Barracudas.

Richard’s bike could qualify as a street bike that’s ready to show and he can back that up as he recently entered a competition and took home 2nd place in two categories. His Harley is an attention-getter and there were even a few times that LAPD officers slowed down to give him a thumbs up or throw him a compliment. These are all well-deserved fruits of his labor and now that he’s found love on two wheels, he’ll be the first to tell you that he’ll never give it up. There’s no better way to end this story than with Richard’s own words, “Todos la conocen con el apodo de chona.”