Newsletter
Sign Up today for our FREE Newsletter and get the latest articles and news delivered right to your inbox.
Home » 2012 Harley Davidson That Kicks a Lot of Softail 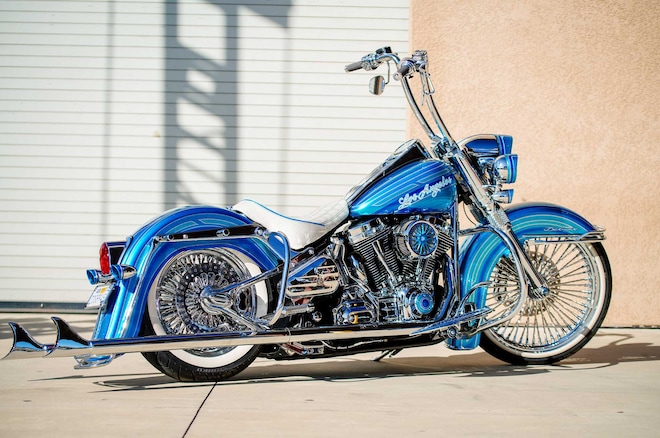 When some have built multiple motorcycles, they seem to have hit a ceiling or cap, as to how much more can be done to set their new build apart from the rest—not the case with this 2012 Harley Davidson Softail. This is a definitive point at which one’s creativity and resourcefulness is tested. Such was the case for bike builder Lil Dave.

Based in Los Angeles, Ca, Lil Dave has always had an affinity for softtail motorcycles. So, when the time came to build another vicla, he knew he couldn’t just settle on the standard parts, accessories and paint. That’s when he reached out to some of the custom world’s heavy hitters to help with turning his Softail Deluxe into the best of the best.

Wade, from Cycle Lounge helped with the tear down, while Mandog of Bonneville Baggers coordinated all of the paint. This masterpiece was created using various Axalta brand candy blues and silver tone paints and was then crowned with delicate striping and coordinating patterns throughout the bike.

Wade at Cycle Lounge added Diamond Cut heads while David Engle of Engle Bros. added all of the metal fabrication, including stretched fenders. A custom-made seat from C&C Seats and Metzler white walls add to this vicla’s unique look. But what makes it even more unique is the hard-to-find dash that was sent from Europe because it’s no longer in production. As Lil Dave says, “We weren’t building just any vicla…it’s all in the details.”

The painstaking customization all paid off in the end, putting this bike in a class all its own. True to its name, El Mero Mero, Lil Dave can confidently say it is the best of the best.

When Robert Trevino isn’t designing and building custom pools he’s infatuated with motorcycles. So, when it came time to build his own, he went all-in and dove into the deep end.