Newsletter
Sign Up today for our FREE Newsletter and get the latest articles and news delivered right to your inbox.
Home » Harley Heritage Softail & Softail Deluxe – Two Harleys, One Painter 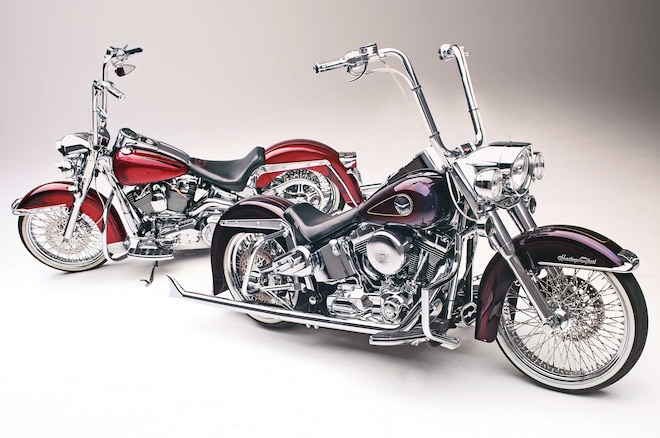 Pete Tavares grew up in a ranch in the outskirts of Salinas, California. His first experience riding was when his dad purchased a Kawasaki 100 from the local dealership. “I learned how to ride at the age of 9 with my six siblings. My older brother got himself a 750 Ninja in the late ’80s. Since then I knew I wanted to get a bike and I ended up going with a Harley, an Iron Horse,” Pete says.

In 2005 Pete bought an all-stock ’00 Harley-Davidson Heritage Softail. With the help of James Serasio of Hole In The Wall Cycles in Salinas he stripped the bike down and began working on it. He wanted to go with the cholo look and began looking for a painter. “Matt Sherman, owner of Imperiouz Auto Body, told me about this new kid, Eddie Padilla, who was painting. I saw a top he did on a ’62 Impala and figured I’d let him paint my bike. After all, how bad could he do on a gas tank and fenders?”

Pete was happy with the end result. This is the first motorcycle he added to his collection of cars. He has four lowriders, a couple pedal cars, and Schwinn bikes. “I’ve got five boys and one daughter. My boys are from 12-18 years old and my daughter is the youngest. I’m hoping when they all have their licenses we can all ride together.”

Efern Munoz got his ’08 Harley-Davidson Softail Deluxe in 2013 from a friend. “The owner got into an accident with it and it needed a new front end. He also got into a financial bind, so I got it for a good deal,” Efern says. He sent the bike to his cousin Eddie Padilla to have work done to it. Eddie had Boulevard Speed Shop in Santa Cruz, California, extend the rear fender and shorten the front one. After getting it back, Eddie added wild cherry candy and pearls. “I got the bike to ride with friends of mine but I ended up going a lot crazier than I planned and don’t ride it as much as I’d like,” Efern says.