Newsletter
Sign Up today for our FREE Newsletter and get the latest articles and news delivered right to your inbox.
Home » Bubba’s Heritage Softail Springer – 2019 Redlands MeatUp Spotlight 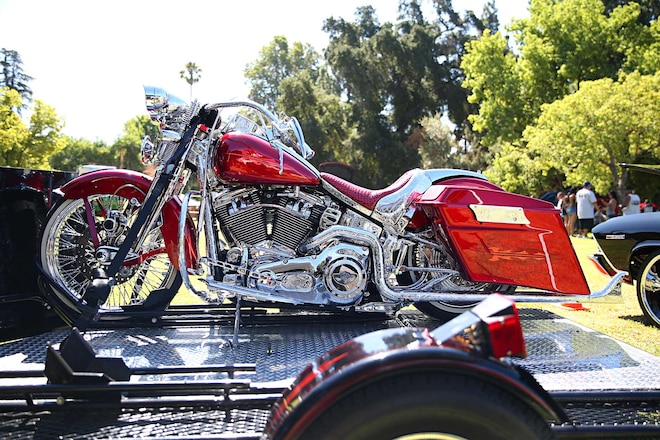 Wandering around the Redlands Meat Up I almost tripped over the exhaust pipes on a motorcycle that was on display. While I was recomposing myself I heard the owner jokingly tell me, “Don’t cut yourself, those things are sharp.” After hearing him say that I looked down and noticed that the exhaust pipes on the bike had fishtail tips and were sporting quite a bit of engraving which made me want to take a closer look at the rest of the bike.

Owned by Gilbert “Bubba” Martus, the motorccyle I almost tripped over is a 100th Anniversary-edition 2003 Harley-Davidson Heritage Softail Springer. Painted in a custom red with ghost flames by Jimenez Bros., McPeak, and Wild Bill, Bubba’s bike features chrome work by Marcel which was polishing by G&A Metal Polishing, and engraved by Jiame Castanda in Banning with diamond cuts by Diamondheads in Las Vegas. Topping off Bubba’s Harley is a custom alligator seat along with some diamond cut wheels, and several select items from Screamin’ Eagle’s catalog.

When I got back to the office I did found out that Bubba’s Harley had been featured in Lowrider back in 2008. After seeing how it looked back in 2008 it’s safe to say that Bubba has seriously how did himself with his Harley.